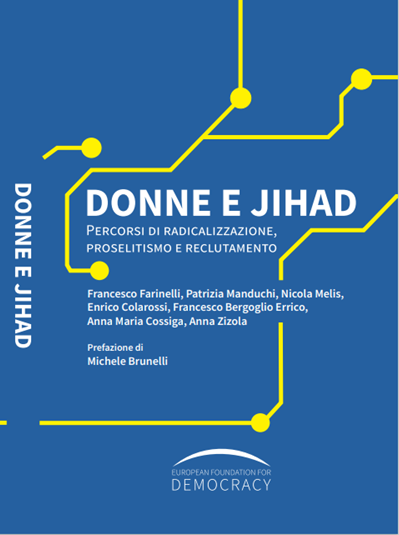 See the Italian version below.

On the 4 November, the European Foundation for Democracy presented the report "Women and Jihad. Pathways of radicalisation, proselytising and recruitment". The event was held at the Spazio Europa, in Rome.

During her welcome speech, the President of the Foundation, Roberta Bonazzi, underlined the importance of discussing issues relating to radicalisation pathways of women in a public and in-presence meeting. She also described the structure of the study, which consists of two general parts based on different fields of analysis: the first one concerns the historical background of the phenomenon of woman’s involvement in jihad, while the second part explored the psycho-anthropological aspects of radicalised women.

The event was divided into two sessions, chaired by the authors and several experts coming from different sectors, due to the interdisciplinarity nature of this study.

Panel I: the authors

The first panel was opened by two lecturers from the University of Cagliari: Prof. Nicola Melis and Prof. Patrizia Manduchi. Prof. Melis analysed the study of the term 'jihad' and its relationship with the Muslim faithful, adopting an Islamic orthodox theological perspective. In this regard, a comparative study of the sources of Islamic tradition revealed that the participation of women in an armed jihad is justified only to defend the Muslim community. Then Prof. Manduchi offered a historical overview of both women fighters in the early Islamic period, as well as the women involved in contemporary jihad, with the aim to analyse if the so-called “female call to jihad” could be really linked to a kind of religious legitimisation. The work presented by Prof. Manduchi shown how poor and inaccurate is the jihadist propaganda in terms of Islamic and religious values, both in general, but also with regard to the recruitment and radicalisation processes that involve the mujahidat, i.e., women 'jihad fighters'. This is especially the case with the propaganda coming from the Islamic State. At the end of her address, Prof. Manduchi highlighted how there are pre-existing psychological and social elements which are often linked to the recruitment process and hold the potential to trigger it.

Mr Enrico Colarossi, a senior analyst at the European Foundation for Democracy, focused on the role of women and their relationship with various sources of official jihadist channels and related supporting groups, which are disseminating information through the Internet: these materials often consist of both magazines and operational manuals such as "Dabiq", "Rumiyah", "Hijra to the Islamic State" or "How to survive in the West", and magazines more oriented towards describing the role of women in the Muslim community, such as "Beituki" (“Your home”). During his address, Mr Colarossi described the doctrinal confusion of these mujahidat which stems from their unclear role in society. Their role in jihad is not clearly explained by the official propaganda from either al-Qa'ida and the Islamic State. Women are usually given a role aimed at providing care and support to the mujahidin, as well as a logistic one, often as a "courier" in the West. To the contrary, an exception to this historical attitude can be seen in the operative role that women have been given in the Al-Khansa' brigade within the Islamic State, a religious police force that is only composed of women. Although they are unmarried and have been trained militarily, they only fight if absolutely necessary. An advantage of having female involvement in jihadist operations is the fact that women are given less attention and scrutiny from law enforcement agencies.

In his contribution, Dr Francesco Bergoglio, a researcher at the European Foundation for Democracy, referred to numerous judicial sentences handed out for jihadist terrorist crimes within Italy. This research has enabled the identification of the pathways of indoctrination and recruitment that women on Italian soil face, as well as the processes that are mostly influenced by partners or families. Alongside this, some examples of radicalised women who actively contributed to the conversion and/or radicalisation of new “sisters” have been reported; in some cases, this was done through online courses that were held on interactive platforms such as Skype. Moreover, it was also noted that the women played a significant role in the financing of some terrorist cells. After having presented the roles of some women in jihadist organisations, he stressed the urgency of the challenges that the Italian legal system faces. There is a pressing need to increase the preventive measures at the educational and cultural level, in addition to those already present in Italy, and concerning repressive measures. Another challenge is that substantial differences exist between the Islamic State and al-Qa’ida in terms of proselytising methods: the Islamic State maintains a more "populist" character, and al-Qa’ida remains a more selective organisation.

The anthropological analysis continued with input from Prof. Anna Maria Cossiga, senior analyst at the European Foundation for Democracy. She focused on the jihadist interpretation of Islam, explaining how the propaganda outlines, through strong illustrations, an image of women having a central role in the construction of the new society. Through this lens, she analysed the contrast between the Western costumes and the empowerment that the Islamic State subtly promises to women in the recruitment processes. Even though they are “hidden” in their clothes and deprived of many freedoms, the female followers of jihad denounce the social and economic inequalities between men and women in the West, considering themselves freer and more emancipated than their counterparts in the West. Their body is sacralised and, therefore, “covered up”. According to many studies, societies that feel oppressed and invaded by the outside world develop extremely conservative cultures and attitudes.

Dr Anna Zizola, independent researcher and policy officer at the European Commission, closed the first panel by analysing the psychological elements of this phenomenon. She underlined the importance of the interview with the “Nucleo Investigativo Centrale” of the Penitentiary Police which was focused on the behaviour of radicalised female prisoners. The monitoring of these prisoners revealed common maniacal care of their bodies, this was extremely greater in the women who had converted than in the women who were born Muslim. Psychology explains this attitude as a result of a continuous search for purification to overcome a past of excesses and to redeem oneself. Calling back to the previous address, Anna Zizola highlighted that the body and the veil are two important conditions in the processes of female radicalisation, as they increase the sense of belonging and favour the construction of one's identity, further fuelled by the acquisition of the new status of super-Muslim, "SurMusulman".

After the presentation of the report, Prof. Michele Brunelli, a researcher at the University of Bergamo, emphasized the active presence of radicalised women in terrorist events within the geopolitical chessboard. The case of the Chechen “black widows” constituted a relevant example of a more active role of women who are involved in terrorist acts, and they represent the first case of organised female actors who were authorised to deal with a regular army at the border, to organise meals in refugee camps, to maintain and support families and to plan and conduct attacks against Russian special forces. The behavioural and ideological differences between “black and white widows” remain a very important issue for understanding jihadist narratives as well as creating effective counter-narratives. Participation of the whole society is needed in the fight against terrorism, and the role of women is essential because of their expertise in the field of gender analysis to combat its spread, especially considering the new challenges represented by the “returnees”.

Dr Caterina Chinnici, a member of the European Parliament and an authoritative voice in the political field dealing with the issue of radicalisation, noted the increasing attention paid to terrorism and the prevention of radicalisation from the previous European Parliament. However, policymakers paid much more attention to the issue of minors rather than the role of women. For this reason, Dr Chinnici expressed the urgency for politicians to take timely and appropriate action, rather than "chasing events". All too often, the role of women has been underestimated, even though knowledge and experiences of how women can help to indoctrinate and recruit young people into different, but equally dangerous sectors, such as organised crime. Although Regulation (EU) 2021/784 is a valid instrument to indirectly contrast propaganda activities of women jihadists, it is limited to the online dimension. Moreover, the problem of female radicalisation cannot be addressed without considering the psychological and social unease of recent times, often due to a lack of integration. The problem of jihadist radicalisation requires precise answers from an attentive legislator and the involvement of all sectors: the scientific and educational world, the law enforcement agencies, and associations.

The floor was then given to Augusto Zaccariello, Commander of the “Nucleo Investigativo Centrale” of the Penitentiary Police, who stressed the importance of this research to support the police work in prison. Radicalisation processes within prisons are carefully monitored at different levels of analysis, in addition to ad hoc de-radicalisation and counter-narrative programmes. The cooperation between prison administration and civil society is fundamental, especially to avoid hampering the educational treatment pathways which detainees start inside the prison. This is critical in terms of disengagement, but also in identifying imams who can accompany the religious identity without jihadist infiltration. In this regard, the protection of religious freedom and the monitoring of security are two fundamental parallel pathways to fight radicalisation within prisons.

To conclude, Dr Cristina Caparesi, psychologist and member of the RAN pool of experts, focused on the analysis of the psychological profiles of radicalised women, particularly on the exit programmes of many extremists from fundamentalist and sectarian groups. In this regard, Dr Caparesi explained how the psychological and individual elements play a central role in the identity “reconstruction” of people, both at the beginning and the end of the radicalisation process. She also underlined how the identity profiles of women are multiple and disparate during a radicalisation process and how they suddenly flatten out once this process reaches its completion. This can be explained by a tendency towards homologation and homogenisation that is a consequence of those mechanisms that aim to annul the personality, and level it to what is permitted and congruent with the ideology, causing trauma, obsessive rituals, and anxiety disorders. The aim of psychology and psychotherapy used during the de-radicalisation processes is to make the submerged ego and sense of self re-emerge, removing those ego-dystonic elements that had rewritten and reinterpreted the past of the radicalised individual in a distorted way. It is not an easy task, and it requires a high level of ability from experts to enter into harmony and confidence with their patients, even if it’s quite impossible for these patients to "go back to the old me" and face their daily lives.