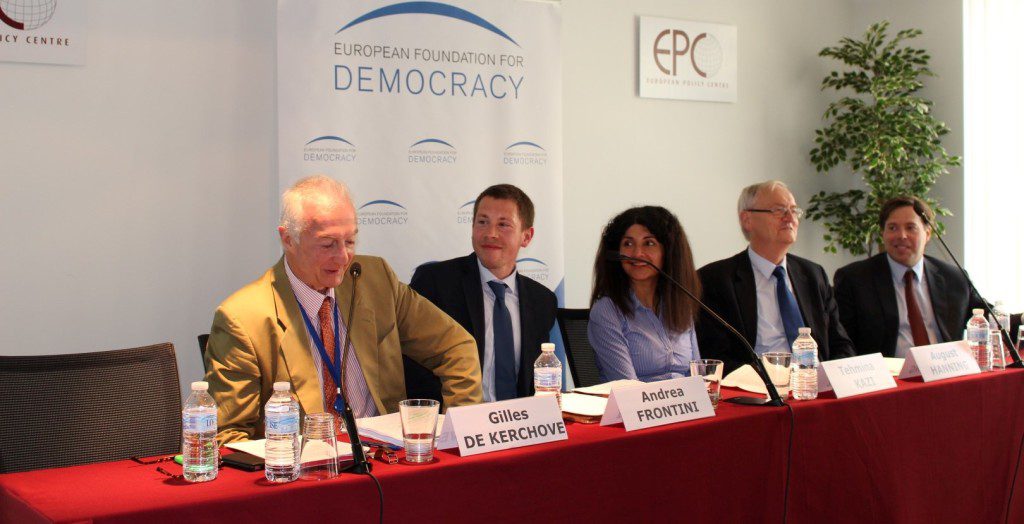 The use of social media for terrorist recruitment: how should Europe respond?

On 1 July 2015, the European Foundation for Democracy and the European Policy Centre hosted a joint policy dialogue to discuss the issue of how social media is being misused by terrorist organisations to spread propaganda and insight extremism. The panel included EFD Fellow Tehmina Kazi; EU Counter-Terrorism Coordinator, Gilles De Kerchove; former U.S. Ambassador to the United Nations and CEO of the Counter Extremism Project, Mark Wallace; and former State Secretary of the German Ministry of the Interior and former Director of the Federal Intelligence Services, August Hanning.

The panel discussed how social media platforms such as Twitter, Facebook, YouTube, Tumblr, WhatsApp and others becoming the primary vehicles for terrorist organisations such as the so-called “Islamic State” (IS/ISIL), Jabhat Al-Nusra and Al-Qaeda to indoctrinate, radicalise and recruit vulnerable Europeans to fight in Syria and Iraq. The debate examined how the EU and other actors can effectively eradicate this phenomenon in the context of a comprehensive and multi-stakeholder counter-terrorism policy and what is the best way to launch a credible and resilient counter-radicalisation narrative in Europe and beyond. The panel also stressed that leaders of Muslim communities had a “special responsibility” to help steer young Muslims from the path of extremism.

CEP CEO, Mark Wallace, highlighted that Twitter, compared with other social media like Facebook and You Tube, has been particularly slow to deal with such “aggressive” extremist content. He urged participants at the conference to send a message to Twitter asking them to address the misuse of its platform by extremists and terrorist groups.