A senior Belgian government minister has demanded fresh action to cut off funding for terrorist activities.

Annelies Verlinden, Minister of the Interior, Institutional Reform and Democratic Renewal, was speaking at a debate held the day after this week’s 6th anniversary of the Brussels terrorist attacks that killed 32 and left hundreds injured.

Annelies Verlinden, Minister of the Interior, Institutional Reform and Democratic Renewal, was speaking at a debate held the day after this week’s 6th anniversary of the Brussels terrorist attacks that killed 32 and left hundreds injured.

She said, “It may be that we need extra measures. The line between privacy and security is thin but we cannot have privacy issues preventing the police from doing their work.

“But the funding for terrorist and extremist activities needs to be addressed.”

In a keynote address, she said that in the last 10 years society been “heavily challenged” and “as if this wasn’t enough we are confronted with a war in own backyard.”

Violent extremism, she noted, “needs to be addressed in all its forms but we must learn from the Brussels attacks.”

She added, “This is a challenge. The health crisis has shown a rise in anti government intolerance and conspiracy narratives, all fuelled by mis-information which has then turned into violence.”

Cooperation and a multi agency approach between all players is essential for the detection and prevention, she argued.

In Belgium, she said there had been a new counter terror strategy in place since September 2021 which seeks to build on past action plans.

A purely security oriented approach is not enough, she said, as integration into society and prevention are also crucial.

“The Brussels attacks in 2016 resulted in profound changes in the security landscape and the fight against terror is a fight for an inclusive society that lives up to EU values.”

When asked about Belgium’s biggest security success story since 2016 and what the biggest challenges now are she said, “We have realized a lot of the post Brussels attacks recommendations, for example, the security services are working more closely together. This helps us prepare for the next attacks.”

One challenge is combating information being shared by terror groups on the “dark web,” which she says “make things even harder”.

She added, “We are also seeing a lot of lone attacks which also makes it harder for the intel services.”

“The new landscape is a challenge in itself.”

The debate heard that the 2016 Brussels terrorist attacks provoked widespread political condemnation and public outrage in Belgium and around Europe. Only a few months earlier, in Paris, the heart of Europe suffered its worse terror attack in history. Since then, the European Policy Centre (EPC), in cooperation with the European Foundation for Democracy (EFD), has each year marked the anniversary of the Brussels attacks with a conference focused on progress in the fight against terrorism and all forms of violent extremism.

The conference (23 March) took stock of and assessed current policy responses at European and national levels, as well as evaluate lessons learned.

Another speaker was former EU council president Hermann Van Rompuy who said that “all attention” was now on the Ukraine war and this was a reminder that “we’re again living in a dangerous world.”

“This event was launched 6 yrs ago when Belgium suffered the worst terror attack in its history. The Belgian authorities were criticised afterwards for failing to prevent people being targeted and drawn into terrorism. But in the past 6 years it has taken important steps to counter terrorism including better coordination  and significant investment.”

While the fight against terrorism starts at a local level much has been done at the EU level with better intel sharing, plus efforts by social media platforms.

“Still, major challenges remain, for example, with gaming platforms which are a hotbed for radicalization and dissemination propaganda.”

The pandemic has “played into the hands”  of extremist “groomers” with people spending more time than ever on screens.

Frontline practitioners such as teachers are crucial and working with vulnerable communities is also vital, he said.

The root causes of radicalization remain and this requires “constant attention.”

“This may have lost the media coverage but these issues persist.”

“It is a constant struggle and we should not be blinded by a false sense of security. One crisis follows another and we will not have sustainable security unless there is more moderation and more dialogue.”

Roberta Bonazzi, President of the European Foundation for Democracy, said there had been “significant progress” since the Belgian attacks and gaps at the time have been addressed.

She said, “What was clear then and is even more today is the phenomenon of terrorism and radicalization is extremely complex and needs a multi level approach.

“It is not something that can be addressed with simple black and white answers. We need better understanding of the root causes behind it and that is a big challenge.”

The pandemic opened a “pandora’s box” of different ideologies, some of which represent a major threat to European security.

Claudio Galzerano, head of the counter terrorism centre at Europol, said counter terror cooperation should never be taken for granted as the threat from terrorism remains unchanged.

The pandemic only temporarily lowered the level of terrorist activity.

“The threat is considerable and remains high in the near future.”

He said the threat from right wing extremists is growing with ongoing political and economic and social tensions being exploited.

The threat is partly fuelled by conspiracy theories and this will continue.The pandemic has limited opportunities for terrorists but online networking has risen with a rising number of young people being radicalized in this way, he said.

In 2014 foreign fighters linked to right wing extremism went to Ukraine to participate in the conflict and the war now could be exploited to spread ideologies and attract followers on one side or the other.

“It will be important to closely monitor developments and share info.”

He said “lessons should be learned.”

Europol took part in over 1,000 high priority investigations and operations in 2021, an “impressive” number compared with  2016 with 127 operations.

He warned, though, that start ups and small platforms don’t have the resources to tackle the issue of terrorism dissemination and propaganda so there was a need for better use of existing data bases and systems and also to share knowledge across traditional boundaries.

When asked how it was possible so many oligarchs with questionable activities were able to maintain huge resources and use the financial systems and markets in Europe to their advantage, he said, “This is beyond my mandate but do stress need for integrated systems to counter this threat.”

Christiane Höhn, Principal Adviser to the EU Counter-terrorism Coordinator, Council of the European Union, said, “The threat remains high and has become more complex. 2015 was a real sea change fort the EU after the Paris attacks and a lot of lessons have been learned. We now use soft powers like sport and culture to assist us. But the challenge from Islamic extremism is still there, for example, in the camps and prisons in Syria, both hotbeds.

“For some, the threat from right wing extremists is seen as an even bigger threat and there are fears that the anti vaccine protests will morph into something else.”

On Ukraine she said, “There are also a lot of arms in Ukraine so what will that mean for the future?”

Philippe Vansteenkiste, Director of the NGO V-Europe, lost a sister in the Zaventem attacks and now runs an NGO that works on preventing radicalisation in Belgium.

He said, “Six years ago my life changed totally. At 1st I didn’t feel we had the right help and over the months I wondered why. So we created this group.

“A lot of progress has followed and victims now have a voice. But when the anniversary comes around I always feel a bit sceptical. Victims still have frustrations and there is still a lot of work to do.What  victims need are dignity, memory, truth and justice.”

Alberto Pietro Contaretti, Project Manager, RAN Policy Support – an EU initiative, agreed on the need to increase info sharing to counter terrorism  but said he wanted to add another ingredient: research. “This can support policymakers in their policy formulation in order to prevent extremism.” 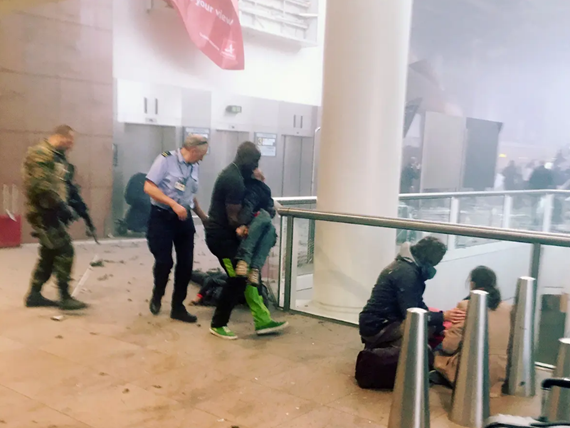