Babyn Yar Wasn’t Bombed. But Ukraine’s Zelensky Finds a Useful Tool to Rally Jews to His Cause

(JTA) — Ukrainian President Volodymyr Zelensky’s direct and emotional appeal to the world’s Jews on Wednesday marked something of a departure for him.

Before and during Russia’s war on his country, Zelensky had spoken plainly to civilians on both sides of the conflict, but he hadn’t directly addressed those outside the country. And for his entire career, he has not been outspoken about his Jewish identity.

So when he and his aides repeatedly drew attention to what they said was happening to sites of Jewish significance this week, some saw a strategic decision at a perilous time for Ukraine.

“He’s using the Jewish angle – and it’s absolutely kosher,” Roman Bronfman, a Ukraine-born former Israeli lawmaker and the author of a book on the immigration of Russian-speaking Jews to Israel, told the Jewish Telegraphic Agency.

Zelensky has never hidden his Jewish identity, but he has never called attention to it, either. At a ceremony last year in Babyn Yar, the site near Kyiv of a massacre of Jews during the Holocaust, Zelensky did not mention the fact that some of his relatives were murdered there, delivering a speech that could have come from any of his non-Jewish predecessors.

During his presidential campaign, Zelensky, a comedian turned politician, dismissed the subject of his Jewish identity with typical self-deprecating humor.

In a 2019 interview with Bernard-Henri Levy, a French-Jewish philosopher, Zelensky declined to explore his Jewish identity at any length, responding to a question about it by saying:  “The fact that I am Jewish barely makes 20 in my long list of faults.”

And yet his chief of staff, Andriy Yermak, wrote an op-ed for the New York Times Wednesday whose second sentence emphasized that Ukraine is “a country that has a Jewish president.” That op-ed was published shortly after Zelensky’s videotaped appeal, which his office translated into English and Hebrew and distributed via multiple social media channels.

“And now,” he continued, “addressing all the Jews of the world: Don’t you see why this is happening? That is why it is very important that millions of Jews around the world do not remain silent right now. Nazism is born in silence.”

Zelensky’s comments were not totally precise. Ukraine is indeed under heavy and unprovoked attack by Russian forces, and civilian sites are increasingly being targeted. But the bomb that fell in Uman, a city of 80,000 with about 200 year-round Jewish residents, landed miles from the grave of Rabbi Nachman of Breslov, which draws tens of thousands of Jewish pilgrims each year.

And despite reports, the rocket that damaged the Kyiv TV tower did not in fact harm the Babyn Yar memorial, located in an adjacent area, according to a veteran Israeli journalist, Ron Ben Yishai, who toured the site Wednesday and saw no signs of damage. “Thank God it’s not damaged,” Natan Sharansky, who chairs the memorial site’s advisory board, told the Forward about the synagogue and memorial site at Babyn Yar.

In both cases, Zelensky cited numbers of Jews involved that are much higher than accepted estimates.

In the fog of war, errors are easy to make. (Television cameras captured the moment that an aide told Zelensky that Babyn Yar was under assault.) Misinformation can also be a powerful tool for leaders seeking to shape popular opinion — something that Russian President Vladimir Putin leverages regularly when trying to appeal to Jewish sentiment. Yermak’s New York Times piece was a rebuttal of the Russian president’s baseless claim that he is waging a “denazification” campaign in Ukraine.

Anna Borshchevskaya, a senior fellow at the Washington Institute for Near East Policy, told JTA that emphasizing Jewish issues and ideas serves Zelensky well given the Kremlin’s narrative.

“When you put forth such an egregious and baseless accusation, unfortunately because of Russian propaganda there are people who believe it, you need to counter that,” Borshchevskaya said. “I don’t think there’s anything insincere about his efforts, but the world needs to know that that you have a dictator in the Kremlin accusing a Jewish person of being a Nazi.”

Bronfman said focusing on the details of Zelensky’s comments may distract from more important issues.

Babyn Yar was not directly hit, Bronfman said. “But isn’t it bad enough that it’s in danger of being hit because of Russian bombs? Zelensky and his people are using this quite rightly to spur world Jewry to speak out,” he said.

Zelensky’s first comments on Babyn Yar, posted late Tuesday on social media, were quickly followed by a stream of condemnations by Jewish groups and organizations that accepted as fact the suggestion that the Russian bombing resulted in damage to the mass graves or the museum built on the site.

Many of those groups have already directed their considerable fundraising and logistical expertise toward supporting Ukrainian Jews, who number anywhere between 43,000 and more than 300,000, according to various estimates.

But it’s clear that Zelensky feels a crucial aspect of Jewish support, that of Israel, is lacking. After his second call with Israeli Prime Minister Naftali Bennett on Wednesday, Zelensky noted on social media that the pair had spoken — but unlike after his calls with other world leaders, he did not thank Bennett for his support or even mention the contents of their conversation.

On Thursday, Zelensky went further, telling reporters at a bunker press conference, “I don’t feel the Israeli prime minister has wrapped himself in the Ukrainian flag” — the show of support that many individual Israelis and others have made.

The Israeli government, wary of Russia’s overweening influence and presence in the Middle East, has been slow to robustly condemn Russia’s invasion of Ukraine, although it joined the United States in a U.N. General Assembly condemnation on Wednesday. Israel also reportedly has declined to share antimissile systems with Ukraine. Bennett spoke to Russian President Vladimir Putin within hours of his conversation with Zelensky Wednesday.

It is weapons, Zelensky has emphasized since the war’s beginning, that his country needs to battle the Russian invaders.

Zelensky has declined to leave Ukraine even as Putin openly declared that he is working to oust him from power. His situation, and his country’s, means that rhetoric used to galvanize needed aid are fair game, Bronfman said. 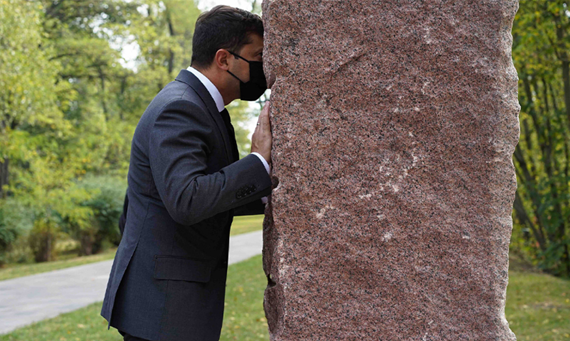