A senior Belgian MP has thrown her weight behind the campaign to find out the fate of a Uyghur woman who has been “missing” for several years.

Gulshan Abbas was abducted from her home in a Chinese province in September 2018 and has not been seen since.

Viviane Teitelbaum (pictured), who is a member of the Brussels Parliament, joined others in making a fresh appeal for information about the case.

She said she gave her “full support and solidarity” to ongoing efforts to find out what has happened to Gulshan, a retired medical doctor.

Her sister, Rushan Abbas, was speaking at the same event in Brussels to raise awareness of Gulshan, one of up to 2 million Uyghurs said to have been taken by the Chinese Communist Party.

The MP told Abbas: “We support you and have our solid and sympathy. I know this is not much and is only words and we cannot make your sister come back. We cannot change the Chinese regime but every step, however, small, makes a difference. So it is still important that we all do what we can.

“For instance, when I buy clothes I put it back if it says it is made in China. This is something we can all do.”

She added: “I give my full support and solidarity for all victims of repression, torture, organ harvesting and detention in labour camps in China. You cannot be indifferent so I call on all of us to take up this case. It is a fight we all need to fight: to walk the walk and talk the talk.

“It is an insult when you hear the Chinese talk and their denial about this because, for me, this this is the worst kind of inhumanity in this century.”

The MP said that the Belgian foreign affairs ministry has taken “a very firm stand” on the issue and the EU has introduced sanctions against China.

“This is important. All of us together can make a difference and help those who are suffering. The Brussels parliament has limited scope on international affairs but we can stop our commercial relations. In this case, the parliament has voiced our solidarity, condemned China and what is happening against the Uyghurs and asked the federal government to apply sanctions. It is important all parliaments do this.”

The event was organized by the European Foundation for Democracy, in co-operation with Jeune MR and the US Embassy in Belgium.

At the start of the event, at the Brussels press club on 12 May, participants watched a screening of the documentary “In Search of My Sister”, the story of Rushan Abbas and her ongoing commitment to creating awareness about the Chinese treatment of the Uyghur population, including her own personal experience.

The 80 minute film reminded the 50 strong audience that Uyghurs had staged several uprisings under Chinese Communist Party rule which dates to 1949. Abbas in the film said that the Chinese regime is “trying to wipe out Uyghur community by force”.

The MP, who has worked on human rights issues throughout a long political career, said: “Watching this was painful and to be confronted by what is happening. That is why we need to fight such discrimination.”

She described Abbas as a “role model and inspiration”.

Abbas, Executive Director of the Campaign for Uyghurs, a not for profit organization which she founded, says she understands that her sister, who was arrested for alleged “terrorist activities”, has been sentenced merely for speaking out against the Chinese regime.

The American Uyghur activist said this is partly based on what a spokesman for the Chinese Communist Party told a Reuters reporter.

She said the comments to Reuters  were made in December 2020 but reinforced by latest remarks on the case by the Chinese regime last month after she held a meeting with the U.S ambassador to the United Nations.

Immediately after this meeting, the ambassador tweeted about the case, promoting a prompt response from the Chinese ambassador to the U.N who described Abbas’ sister as a “criminal” who had violated Chinese laws.

Abbas said: “My message then and today is: please show me the proof of this.”

She told the event that she still has no news about the whereabouts of her sister, where she might be held or even if she is still alive.

“It is heart-breaking to have no news on my sister,” she said.

Abbas, who carries a photo of her sister with her at the many international events and rallies that she attends, added: “The last time I heard from her was in September 2018, some 45 months ago. Since then I have heard nothing and do not actually know if my sister, who is 59 years old, is still alive. I hope she is still alive but I just do not know.”

“What the Chinese are doing is criminal and a crime against humanity.”

She is also critical of the Chinese regime for refusing to allow the international media to inspect the so called re-education centres.

Abbas, slightly younger than her sister who she calls “my rock”,  is based in Washington and was in Brussels  to attend a conference on the plight of the Uyghur community in China, including her sister.

This included a meeting on Tuesday with MEPs at the European Parliament. A Coalition has been set up which has called on international companies which rely on “Uyghur forced labour” to cease trading in the region.

The trade in what is called forced labour is particular strong in the textile industry with well-known brands selling clothing in Europe and the West which has been manufactured by Uyghur people.

Abbas said: “While parents are sent to camps their children are put in so called educational facilities and raised as Chinese but it is time to stop this 'Holocaust' of my people.”

Speaking at the same event at the press club Olivier Humblet, International, Immigration, Foreign and European Affairs Delegate of Jeunes MR, said both he and his organisation were “greatly concerned” about the issue and plight of Abbas, saying: “We want  this (treatment of the Uyghur people) to be declared by the international community as genocide as it falls within the definition of genocide and, also, for diplomatic relations with China to be halted."

Further comment came from Nima Hairy, president of International and Economic Integration Commission of Jeunes MR Brussels, who added “The documentary we have watched is very emotional and very sensitive and highlights oppressive behaviour. It is hard to watch these images and these denials by the regime.  At our level we take a  lot of interest and take this very seriously.” 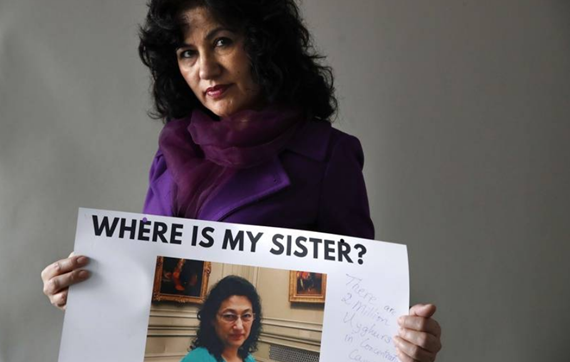