EUobserver covered Nobel Laureate Shirin Ebadi's recent briefings in Brussels on the human rights situation in Iran, which the European Foundation for Democracy was proud to host. 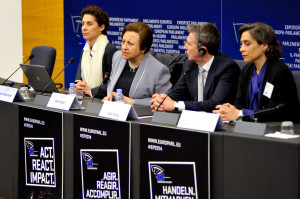 BRUSSELS - Shirin Ebadi, an Iranian former judge who won the Nobel Peace Prize in 2003 but who lives in the UK, believes that if she returned to Tehran “Iranian people would welcome me, but the intelligence services would come to arrest me with handcuffs.”

Asked by EUobserver if Iran would hang her, she said: “I don’t know.”

Her comments, in Brussels last Thursday (13 March), show how little she thinks the country has changed despite the election of President Hassan Rohani, a moderate, and despite the warming up in EU and US ties.

Ebadi noted that when EU foreign affairs chief Catherine Ashton went to Iran, also last week, her meeting with a handful of women activists prompted hardliners to put up billboards depicting her as the late Iraqi dictator Saddam Hussein.

“I am just explaining the realities of Iran,” Ebadi said.

“According to the constitution, the Supreme Leader [Ayatollah Ali Khamenei] has all the power … This is why Mr Rohani is having trouble implementing reforms. The leader is not allowing reforms to go through because he is afraid the regime might collapse.”

The number of executions under Rohani tells a similar story.

According to the Abdorrahman Boroumand Foundation, an Iranian NGO, Iran has executed 198 people this year, 25 of them in March. If the trend continues, the death toll will surpass the figure (512) in 2012, the year before Rohani took office.

Many of the killings are for drug crimes.

Many are political: On 27 January, Iran hanged Hashem Shabani, a 32-year-old poet who spoke out against mistreatment of the Ahwazi Arab minority, for “spreading corruption on earth.”

But with Ashton currently considering Iran’s proposal to relaunch an EU-Iran "human rights dialogue," Ebadi believes there is an opportunity to make a difference.

She urged the EU to use the same approach as UN powers in the so-called E3+3 talks on Iran’s nuclear programme.

“They should ask the Iranian regime for a few things in advance as a test of its intentions … By fulfilling these conditions it can prove it believes in human rights and, accordingly, a dialogue may begin.”

She said the preconditions should be: an end to executions in public; an end to death sentences for minors under the age of 18; and letting people from the Baha’i religious minority study in university.

Ebadi says Iran wants the dialogue, and for the EU to open an embassy in Tehran, for the sake of its reputation: “The government is eager to have talks so that the international business community comes to Iran."

She added that it wants to “bypass the UN by having human rights talks with the EU instead.”

With Ashton on Monday also going to Vienna for the next round of E3+3 talks, Iran’s human rights record is often cited by Israel and some US politicians as a reason why it cannot be trusted.

For Ebadi, the best way for Iran to answer its critics would be to change its ways.

“If Iran thinks that [its] execution of children may become an excuse for Israel to take advantage of, it should change its practice so that others cannot abuse the situation.”

For their part, Iranian diplomats say that Khamenei allowed Rohani to run in last year’s elections, and Rohani won, because authorities are responding to people’s desire to live in a more open society.

They also say the Iranian opposition has not held protests since 2009 because of the example of Egypt and Syria, where sudden change led to chaos.

Ebadi agrees that “Iranian people do not support the government, which has isolated Iran. They want to be in touch with the world.”

But she sees Syria in a different light.

“The Iranian government is the only one which has dispatched military forces to Syria and which has said they will not allow the rule of [Syrian leader] Bashar al-Assad to collapse. This was a message to the Iranian people - that the Iranian regime is also ready to fight, even if it turns Iran into a second Syria.”

“As yet, the precise form in which things will move forward is still to be decided,” he noted. The idea of opening an EU embassy in Tehran “didn’t come up at all on the trip,” he added.

Iran’s embassy to the EU did not respond to EUobserver’s questions on Ebadi’s remarks. 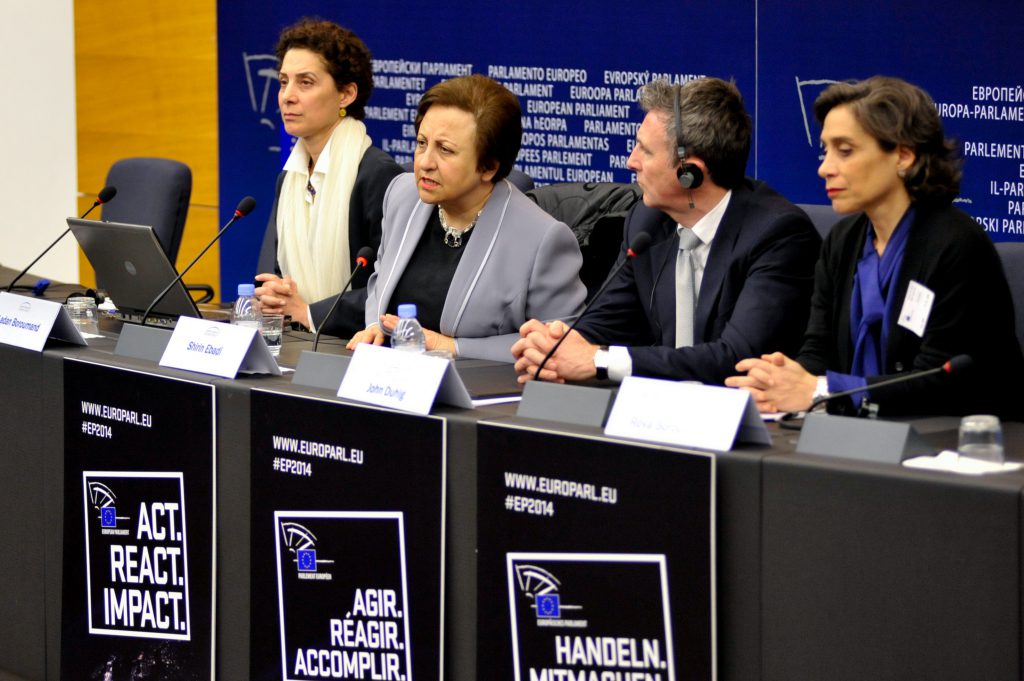