Chinese “persecution” of Uyghurs in the Xinjiang Uyghur Autonomous Region in China should be officially recognised as genocide and urgent action should be taken by the EU and international community, including a boycott of the 2022 Winter Olympics in Beijing. These were two of the main messages to emerge from an online debate on the plight facing millions of Uyghurs in China, writes Martin Banks.

Chinese “persecution” of Uyghurs in the Xinjiang Uyghur Autonomous Region in China should be officially recognised as genocide and urgent action should be taken by the EU and international community, including a boycott of the 2022 Winter Olympics in Beijing. These were two of the main messages to emerge from an online debate on the plight facing millions of Uyghurs in China, writes Martin Banks.

The virtual debate on Thursday was organised by the European Foundation for Democracy, in cooperation with the U.S. Embassy to Belgium and the US Mission to the EU. Belgian MEP Assita Kanko, vice chairwoman of the ECR group, said it was “time to act” against Chinese persecution of Uyghurs, adding: “China has economic power but the democratic nations of the world must take action to take the wind out of China’s sails.” She said China’s approach to human rights is unchanged and that treatment of its Muslim population had deteriorated to a “terrifying” level.

Accusing China of “genocide and abuse of human rights on an industrial scale” she urged the EU to “address this and sooner rather than later”. She added: “We have already seen what a US/Chinese trade war looks like during the Trump era and while Trump got a lot wrong he was right to set in motion a set of sanctions against China. But we must not let this issue slide off the agenda but, rather, broaden international efforts to stand up to China.”

Specifically, she said action was needed by the World Bank so that finance to China is curtailed. The commission, she noted, is also due to table new due diligence legislation this Spring which aims to deter trade with regimes and businesses using forced labour.

“This is vital because the EU must carry out due diligence on those companies and countries using forced labour.

"China is hosting the next winter Olympics and I know that while this is a sensitive issue a boycott is something that should be discussed at the very least.” She added: “China has economic power but a moral deficit so it is up to the West to stop turning a blind eye to human rights abuses. This is not a price that is worth paying.”

Her comments were echoed by another speaker on the all-female panel, Belgian Greens MEP Saskia Bricmont, who described the plight of the Uyghurs as a “crucial issue”.

She said: “The first thing to do is to raise awareness first and foremost about what is going on in the region. It is a genuine genocide we have to be vocal about it.

“European companies must renounce their contracts with China and shed the light on what is going on, especially in the textile sector.”

She said that an “official recognition” of the genocide by Belgium would be an “important step”, adding: “All EU members and the U.S should do this too so as to put pressure on China.”

She voiced concern at the EU China Trade and Investment Agreement. The new deal is set to remove barriers for Chinese entry into the European single market and give Chinese companies access to investment in European companies, including state enterprises.

“The EU must prohibit products coming on to the EU market which are generated by forced labour.Parliament is working on two important reports, on due diligence for companies and sustainable governance, which aim to address this. This will not be an export ban but can contribute to bringing leverage on China to stop this abuse against the Uyghurs.

“The EU should not have partnerships with partners that do not respect human rights and Belgium can also play an active role in this.”

However, she warned that Russia “had to go very far in its disrespect for human rights” before the EU acted and some countries still have “huge economic interests” with China such as Germany and France.

“This is very problematic but, yes, recognising this abuse as genocide would affect trade and economic relations with China and this is one area where Belgium could act concretely.”

Another way Belgium could act is to agree to grant special visas to Uyghur students so that they might live in place of safety.

“This could also maybe be an open door to formal recognition of genocide which would be a strong and important signal which others should follow.”

She admitted, though, that the EU lacks a “consistency of policy” on China and that even if there were restrictions on the placement of goods on EU markets this would not necessarily mean “this Chinse persecution will stop”.

Asked if it was already too late to act against China, she said: “It is not a case of now or never but it is almost at that stage.”

She also revealed the pressure she had come under for speaking out, saying: “Chinese authorities have tried to influence and lobby me but they have now stopped trying. When they see it’s not working they try instead to discredit you by accusing one of fake news. This shows they have a well organised communications strategy but, to me, this reinforces my belief we have to keep fighting. It is our duty to raise awareness of this issue.”

Another speaker was Sylvie Lasserre, a freelance reporter and author of Voyage au pays des Ouïghours who has travelled to the region in the past and, after working on the issue for 16 years, is well placed to share details about the situation. She told the meeting: “This persecution is made possible in the name of money. It is estimated there have been 3 to 8 million Uyghurs in camps since 2014 but you have to ask how can we accept laying out the red carpet at events like the World Economic Forum in Davos to China?“

At the end of WWII it was said this could never happen again so the only reason why it is still happening is money with numerous countries like Morocco in need of finance from China.

“That is why most countries remain silent about this repression. Emmanuel Macron, for instances, met China’s leaders last week and did not even mention the Uyghur issue.”

In December, the European Parliament adopted three resolutions taking stock of the human rights situation in China, forced labour and the situation of the Uyghurs in the Xinjiang Uyghur Autonomous Region in China.

Parliament strongly condemned the Chinese government-led system of forced labour – in particular the exploitation of Uyghurs – in factories within and outside internment camps in the autonomous region. It also denounces the continued transfer of forced labourers to other Chinese administrative divisions, and the fact that well-known European brands and companies have been benefiting from forced Chinese labour.

In recent months, newly discovered evidence has further highlighted the gross violations of universal human rights being perpetrated against the Uyghurs in China.This includes recent reports of sexual violence and rape being used by the Chinese authorities against Uyghur people in Xinjiang.

Lasserre added: “China is systematically hiding the truth but, even though, it has been caught red handed in its mistreatment of the Uyghurs, they don’t care. As we have recently seen they are now waging an aggressive campaign against women in the Uyghur camps. Yes, China is under pressure but the EU still remains dependent on China for business.

The journalist said: “It is difficult to know China’s true intentions but it is said the plan is to eradicate one third of Uyghurs, to convert one third and put the rest in camps. “What is important is that EU countries must stay united in any reprisals and sanctions against China.”

She also supports moving the winter Olympics to another country, adding: “China is inspired by the Nazis in trying to eradicate the Uyghurs. It has become an Orwellian state and is committing genocide.

“This, though, is a chance to stop our dependence on China. But the EU must take very strong measures to improve things.” 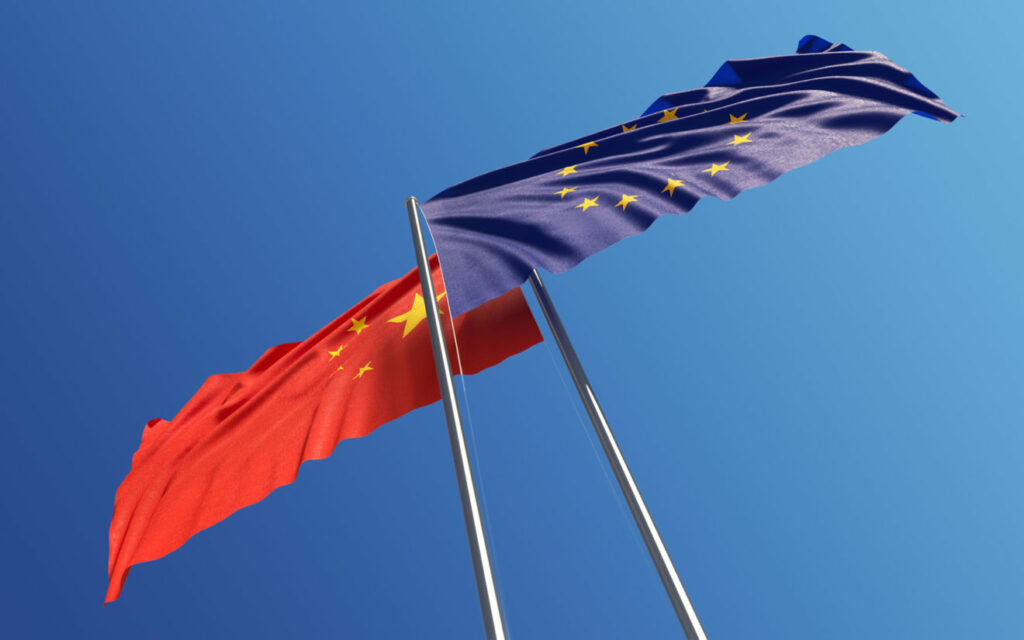