EU urged to follow US ‘model’ in combating forced labour

The EU has been warned that new draft legislation designed to halt forced labour is still insufficient to tackle the problem.

The European Commission was told that a “whole series” of other measures will be required to put pressure on China to end the forced labour of Uyghurs.

The comments were made by Chole Cranston, Business and Human Rights Manager at the UK-based Anti-Slavery International, who was speaking at a webinar on the issue.

She also warned that, contrary to addressing the issue, the EU could end up becoming a “dumping ground” for products made by Uyghurs.

The panel discussion, “Uyghur Forced Labour: Can the EU’s directive on corporate sustainability due diligence prevent it?”, examined measures being proposed and assessed their hoped effectiveness as well as possible pitfalls in ending the forced labour of Uyghurs in China.

The debate is timely not least as, in her State of the European Union address, Commission President Ursula von der Leyen promised to put forward a concrete proposal on forced labour.

Two experts and an MEP explored the scope for targeted legislation to end forced labour practices similar to the “Uyghur Forced Labour Prevention Act” in the U.S.

The focus, though, was on a legislative measure by the European Commission which, in February, released its proposal for a directive on corporate sustainability due diligence.

The EU hopes the measure represents an important tool to stop human rights and environmental violations being carried out throughout corporate supply chains.

The draft imposes an obligation on companies to produce a yearly assessment report detailing the implementation of the due diligence obligations.

The proposal also introduces a “duty of care” for directors of companies, which obliges them to adopt an action plan to explain their business model and show that their business strategy is compatible with a sustainable economy.

Member States and the Commission will have to provide accompanying measures and tools for SMEs.

Cranston told the debate, “Overall, we believe the draft directive can go some way to help prevent forced labour but it is not nearly sufficient on its own.”

“We have published a full analysis of the directive on our website and we believe the directive has some serious faults which will undermine its overall objective.”

One problem, she argued, is that the draft covers only a “limited number” of companies, an estimated 17,000 companies which each employ over 250 employees or more.

“This is likely to extremely limit the scope of the directive.It means that only 0.2 per cent of companies in Europe are covered by the proposal which is extremely self defeating.”

She also said that the directive does not include a mapping of company supply chains, meaning that raw materials for goods like cotton will fall outside the scope of the directive.

When asked what else the EU might do, she said, “This directive was never going to be the silver bullet to address the problem so, fundamentally, the EU must bring in a whole series of measures to put pressure on China.

“We need something like the U.S Act, a trade based mechanism that allows EU to seize products made from forced labour at borders.”

She added, “The U.S Act is hugely welcome but the EU, if it does not step up and do something comparable, could become a dumping ground for Uyghur forced labour.”

Bulgarian MEP lhan Kyuchyuk, a long time supporter of Uyghurs and among a group of MEPs who have been blacklisted by China for speaking out on the issue, said, “This is extremely important topic and the EU must ensure its proposal is going to be effective.”

He added, “Companies must be required to publicly disclose who their suppliers and business partners are in order to identify the risk of force labour.

“Several companies have acted but this work should be harmonised. Given the scale of repression against the Uyghurs, it is impossible for companies to operate in the Xinjian region in compliance with current international regulations.”

He added, “We should see more engagement from companies because, so far, it is NGOs who are leading on this issue. It is also crucial to have access to EU customs data. I urge the Commission to think about these points and ideas and we in the Parliament will continue to monitor things.”

Another keynote speaker was Alim Seytoff, a journalist and director of the Uyghur Service at Radio Free Asia, who pointed out that, on 21 June, the US administration is expected to enforce the Uyghur Forced Labour Prevention Act which was signed into law by President Biden last December.

He told the webinar: “This is an extremely powerful piece of legislation because it bans all goods made in the Uyghur provincial region. Several U.S Senators have urged to vigorously implement the legislation, not just in this region but also outside Xinjiang.”

He went on: “This makes sense, not least because for the past five years the Chinese government has been committing genocide against the Uyghur community, a genocide recognised by the U.S administration.

“Of all the sanctions imposed against China, the most significant is the one placed on production in the region.”

He pointed out that, besides the US, in late April the UK banned health-care products from Xinjiang region.

When asked how the international community can help stop the genocide, he said: “China must be compelled to stop forced labour.

“Despite such action (by the U.S and others) nothing has changed on the ground and, if anything, it is getting worse.”

He said: “The EU is China’s 2nd largest trading partner and it has a moral and legal responsibility to pressure China to stop forced labour and genocide.”

The EU, he argued, should enact similar legislation like the U.S Act and ban Chinese products that contribute to the manufacture of goods such as solar panels.

“The EU should also stop financing products from the Uyghur region which may benefit from slave and forced labour.”

Brussels, he told the online debate, should also consider ending all co-operation with China in the area of medical and research.

He also described what it was like working as a journalist while trying to defend the rights of Uyghurs, saying: “China has detained lot of Uyghur reporters and sentenced some to life imprisonment. Ours is the only free service of its kind in the world and we have played a tremendous role in exposing China’s genocide. China knows this and tries to silence us. What we have done in five years is successfully confirm the detention of tens of thousands of Uyghurs in camps and have spoken to camp survivors. Despite all the pressure on us we have done an amazing job and we are very proud of our work.”

The event, on 7 June, was organized by the European Foundation for Democracy, in cooperation with the US Mission to the European Union. 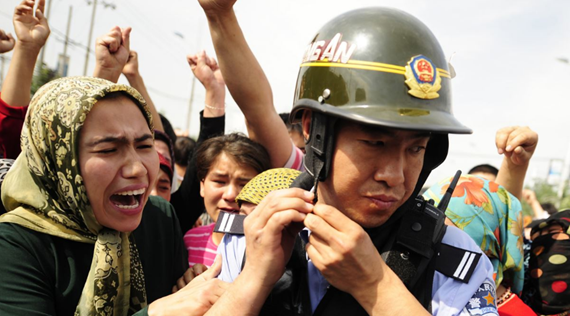