EFD is disseminating a ‘Guide to Refuting Jihadism’ 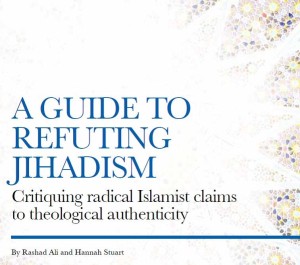 EFD is supporting the dissemination of A Guide to Refuting Jihadism, which highlights classical Islamic scholarship that challenges jihadist theological claims.

As part of our longstanding efforts to support European Muslims who are countering radical Islam, EFD is disseminating A Guide to Refuting Jihadism within Muslim communities in Britain and Europe. Hundreds of copies are being distributed in an outreach programme that includes events at leading British mosques and Muslim associations.

The guide, which was published by the Henry Jackson Society, presents scripturally sound theological arguments that contradict core tenets of jihadist thinking such as: the need to re-conquer Islamic lands, the goal of re-establishing the Caliphate, justification for targeting non-combatants and the rejection of democratic governance as non-Islamic.

Prominent Muslim scholars have endorsed the Guide, such as Sheikh Khalid Abdul Aziz Omran from al-Azhar in Cairo, Sunni Islam’s highest religious authority, who wrote that “this scholarly research will be a seed of general benefit in (...) correcting the thinking of extremist groups that have misunderstood jihad in Islam.”

Co-author Rashad Ali has discussed the report at numerous speaking events, including with the Sharia Council at the Regency Mosque in London, the Islamic Society of Britain and the Norwich Mosque in Birmingham, as well as with Muslim groups in Denmark.

Ali is a member of the Network for a New European Generation, a group of European Muslims who advocate for liberal, democratic values of pluralism, tolerance and equal rights. EFD has been coordinating the Network since 2010, bringing more than 30 activists together on a regular basis to share information, receive media and advocacy training, and develop opportunities for joint cooperation.

The report was launched by the Henry Jackson Society in the UK Parliament on 4th February 2014 at an event hosted by Jim Fitzpatrick MP, with co-authors Rashad Ali and Hannah Stuart. Stay tuned for an EFD launch event for European officials and diplomats in Brussels.