Empowering European Muslims to counter radical extremism has been a key part of our work at EFD since we facilitated the launch of the Network for a New European Generation in 2010. The Network consists of European Muslims who are committed to advancing liberal, democratic values within Muslim communities in Europe. Today, we are focused on raising the public profile of Network members who are courageously addressing these sensitive issues.

That’s why we were especially pleased when La Croix, one of France’s oldest and most respected newspapers, published an article about the importance and impact of our work this March. 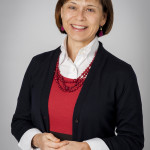 “We want to raise the voices of European Muslims who

support European values – freedom of thought, pluralism and respect for individual freedoms. Many of these individuals exist, but they lacked a network [until we intervened].” - Roberta

At EFD, we are proud that our network members have helped to drive this debate in Europe and pleased that La Croix is helping to publicise our efforts. The original article appeared in French here, however we have provided a translation in English below.

Faced with growing radicalisation, Europe tries to unite the initiatives on the ground.

In Brussels, the European Foundation for Democracy (EFD) has been working to offer greater visibility to activists on the ground who fight against political and religious radicalisation in Europe for the past four years.

“We want to raise the voices of European Muslims who support European values – freedom of thought, pluralism and respect for individual freedoms. Many of these individuals exist, but they lacked a network [until we intervened],” explains Roberta Bonazzi, director of the European Foundation for Democracy.

Established in 2005 to defend European democratic values, the foundation launched a programme in January 2010 that supports liberal Islam and has since focussed on crafting solutions against violent extremism. Notably, it offers a platform that brings together grassroots activists engaged in the prevention of certain vulnerable groups being drawn into radicalisation. EFD publicises their work and enables Network members to influence European policy.

“The debate on radicalisation should take place firstly in schools and universities, and teachers should be trained as well. Only then can they learn to recognise radical tendencies early and prevent this development by proposing alternatives,” explains Ahmad Masour who is a Programme Director at EFD. Ahmad, an Israeli Arab recounts how he himself was part of a Salafist movement during his youth, but abandoned the cause when he went to University and studied psychology. Since then, he has dedicated himself fully to a prevention programme for Muslim youth in Berlin, where he leads workshops against violent extremism in schools. Together with EFD, he advocates in favour of developing European-wide criteria to help educators identify and prevent radicalisation.

“For four years, there has been a real political and institutional awakening in Europe and a lot of progress in understanding these questions,” explains Roberta Bonazzi, alluding especially to the work of the Radicalisation Awareness Network, launched by the European Commission in September 2011.

“National governments also equip their municipalities with the means to fight radical Islam. But, obviously, nothing really efficient can be done without access to the target communities. We have to coordinate actors at the grass roots level to perform this daily dialogue, which requires patience and interaction at all levels,” Roberta Bonazzi argues.

Cecilia Malmström, the European Commissioner responsible for home affairs presented an action plan on 15th January that calls on EU Member States to strengthen the fight against extremist violence, notably by implementing preventive measures in a coordinated way. During the next four years, the Commission will allocate as much as 20 million euros to finance the establishment of a European centre to facilitate information sharing and best practices. The Commission recently brought together in the Hague representatives of about twenty European towns confronted with the challenge of local fighters who have left for Syria..