Across Europe, increasing focus is being given to human rights due diligence, supply chain transparency, and modern slavery risks. In March 2021, the European Parliament adopted a resolution with recommendations to the European Commission and a draft Directive on Corporate Due Diligence and Corporate Accountability, calling on the European Union (EU) to legally require companies to respect human rights and the environment in their supply chains. While some countries in Europe have already adopted their own regulations, it is vital for the EU to take unified action and uphold its democratic values. Gross human rights violations such as the ones being perpetrated against the Uyghurs in China, can no longer go unrecognised - European Foundation for Democracy.

Across Europe, increasing focus is being given to human rights due diligence, supply chain transparency, and modern slavery risks. In March 2021, the European Parliament adopted a resolution with recommendations to the European Commission and a draft Directive on Corporate Due Diligence and Corporate Accountability, calling on the European Union (EU) to legally require companies to respect human rights and the environment in their supply chains. While some countries in Europe have already adopted their own regulations, it is vital for the EU to take unified action and uphold its democratic values. Gross human rights violations such as the ones being perpetrated against the Uyghurs in China, can no longer go unrecognised - European Foundation for Democracy.

A webinar organised by the Brussels-based European Foundation for Democracy, (EFD) in conjunction with the U.S. Mission to the European Union, examined issues of forced labour, the persecution of the Uyghurs, and the need for concrete measures to be taken at EU level requiring companies to monitor, identify, prevent, and remedy risks to human rights, the environment, and governance in their operations and business relationships.

In his introduction, host Dr. Murat Seyrek, EFD Senior Policy Advisor, spoke about an increasing focus at European level on the issue of China’s human rights abuses. However, he stated that while awareness in itself is a good thing, ‘we also need some concrete measures against this issue.’

Dr. Seyrek introduced his panel of experts, who laid out their own thoughts on the issues in question.

Miriam Lexmann, a Member of the European Parliament’s Committee on Foreign Affairs, said ‘Ursula von der Leyen, in her State of the Union address promised that the EU follow suit with the U.S., that there will be import bans on goods that are produced by forced labour.

'But now we hear that this is delayed, that we are now talking about Spring of next year, and also we hear that practically the Commission is planning to avoid to hit the main problem of the issue and address it through “due diligence” legislation, which I find very problematic because practically the political responsibility for the impact on international trade on human rights in third countries will then, if it is only addressed through due diligence, will fall on the shoulders of private companies.

We do have evidence that products that are in our market are produced by forced labour in China… Xi Jinping is personally responsible for the dire situation in human rights and practically the genocide against the Uyghurs.

Ms. Lexmann gave an example of how the EU institutions themselves are contributing to the situation, referring to evidence that thermal imaging cameras installed in the European Parliament ‘are produced by Hikvision, a company which is already on the sanctions list in the US. There is clear evidence that this company is using forced labour of Uyghurs in Xinjiang.’

Sam Goodman, Senior Policy Advisor, Hong Kong Watch, addressed the issue of “ethical investment”, or rather the lack of it: ‘while parliaments across the west label the treatment of Uyghurs as “genocide”, and pass motions condemning the destruction of Hong Kong, there is a different conversation happening in the boardrooms of Wall Street, the City of London, and amongst financial service workers in Berlin, Paris, Switzerland, and other parts of Europe.’

He went on to name the guilty: ‘This conversation, led by the likes of BlackRock, Allianz Global, Deutsche Bank, Credit Suisse, UBS seeks to encourage further investment into China while at the same time these very financial service institutions purport to invest their clients’ money ethically, abiding by the environmental social governance ESG criteria.

‘These voices call for a greater share of European pensioners money to be invested in Chinese companies… They appear to be unmoved by the sheer hypocrisy of this approach. They do not appear to be willing to acknowledge the legitimate risk posed by Xi Jinping’s crackdown on technology companies, China’s property market bubble, or the economic fallout military conflict in the Taiwan Strait would bring.’

Regarding the EU, Mr. Goodman called for the EU to initiate investment bans and sanctions along the lines of those already imposed by the U.S.

‘It is indefensible to me, and to many others,’ he said, ‘that European investors, and investors in the Asia-Pacific region, continue to invest pension funds in companies guilty of incarcerating and enslaving the Uyghurs. At the very least, this entities list should include the likes of Hikvision, Daiwa Technologies, iFlytek, and others who have been identified by human rights groups as having a direct involvement in the camps.’

Furthermore, he continued, ‘the EU must use the new sustainable finance disclosure regulation to clearly define ESG criteria, in particular ensuring that a commitment to human rights is a core part of it. To put it bluntly, we shouldn’t be allowing financial services companies to mark their own homework.’

Rushan Abbas, Founder and Executive Director of the Campaign for Uyghurs warned ‘Europe, in particular, is faced with a crisis of leadership and a test of morality today… Meanwhile the international community is profiting from the slave labour of those who are being brutally wiped out . All of this is being justified by the international community because of the “complicated relationship” with China. Is the morality of cooperating with the architects of this evil complicated?’

‘It is truly vital that the European Union takes meaningful concrete action to address (its) complicity in modern slavery.’

Ms. Abbas, whose own sister disappeared into the camp system more than three years ago, called for import bans on any and all products originating in the Uyghur homeland. ‘What is considered as a policy decision by so many in the the international community is life or death for my people. For Uyghurs,’ she added. 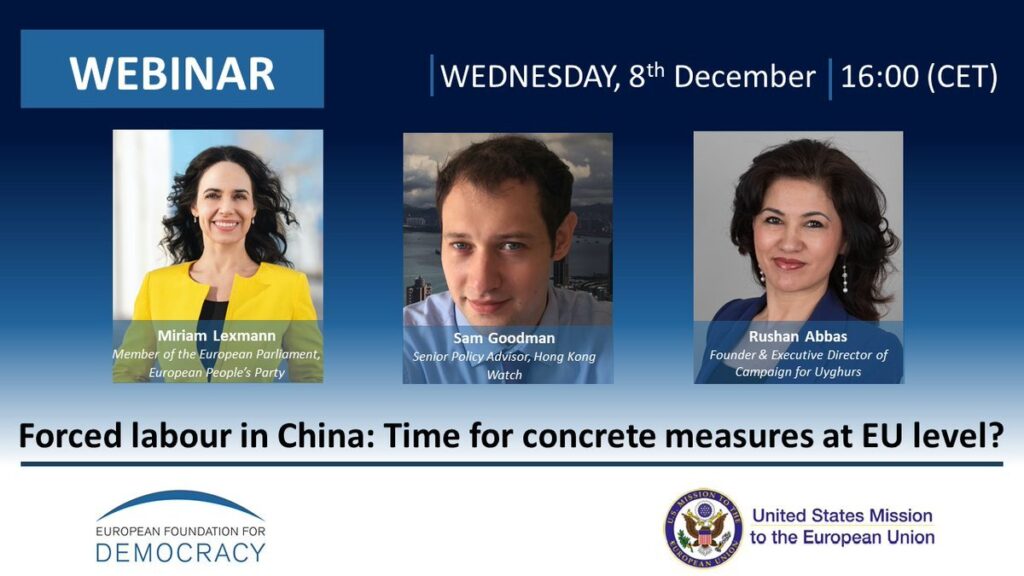