Global food insecurity: Why Putin’s battle for Ukrainian farmland is so dangerous

The war in Ukraine continues to exacerbate food insecurity globally, and especially across the Middle East. Prior to the war Russia and Ukraine together exported over one-fourth of the world’s wheat, along with a major share of other key commodities that feed the world. The Middle East especially has become dependent on Russia and Ukraine for its food as compared to other regions.

Many earlier reports highlighted that surging prices on food essentials and shortages of food supplies are creating major disruptions. Unfortunately, analysts are underestimating the full scope of the negative impact the war will have on the food situation, while governments appear unprepared for what is to come.

First, it is not just about wheat and other crops. Russia is also the world’s largest supplier of fertilizer, which is crucial for agriculture. After invading Ukraine, Russia has suspended these exports. The planting season in Europe is happening now, and this includes Ukraine. It is difficult to image Ukrainian farmers will be able to plant at full capacity due to the war, as most of Ukraine’s grain production areas are in central, eastern and southern Ukraine — primarily areas Moscow is fighting to control. Indeed, Ukrainian farmers have donned bulletproof vests in order to do their jobs.

It is not just a matter of putting seeds into the ground; soil needs to be constantly treated with fertilizer and other agricultural chemicals to ensure a healthy crop. So the absence of fertilizer puts everyone’s agriculture in jeopardy.

Nor is Russia alone in suspending fertilizer exports. According the Peterson Institute for International Economics, China has “ordered its firms to stop selling fertilizer to other countries, in order to preserve supplies at home.”

Second, there is the military reality on the ground. Russia’s recent declaration of intent to militarily seize all of southern and eastern Ukraine will likely be accompanied by a focused campaign to prevent Ukraine from benefiting from its fertile croplands. Russia will likely unleash a campaign of total destruction of Ukraine’s agricultural sector. Meanwhile, the Russian military’s focused destruction of Ukraine’s physical economic infrastructure will likely continue, targeting logistical infrastructure needed to export any yields Ukrainian farmers are able to achieve. This would rob Ukraine and the international community of any possible agricultural exports that might help alleviate food insecurity.

Then, there is the issue of energy prices. Most have focused on rising gas prices, and to be sure this problem is bad enough. But diesel prices have quietly gone up even higher than gas since the war in Ukraine began. In the U.S, diesel has remained $5 per gallon or higher since the start of the war, while gas prices have fluctuated around $4 per gallon. Diesel remains the largest source of fuel for trucks, tractors and other transportation that carries food. This situation will add to the overall cost of food production that will drive a rise in prices.

This brings us to the global dimension of this crisis. Earlier this month, Indonesia, the world’s top palm oil exporter, announced a ban on these exports to keep food prices in their country under control, a “move that lifted prices of all edible oils and sowed confusion and alarm among palm oil exporters and consumers alike,” as reported by Reuters. The ban is expected to be short-lived, but even so, it is a harbinger of other countries cutting exports of crucial food and other commodities in an effort to keep internal inflation in check. Thus, the food crisis is bound to get much worse.

What does this mean for the Middle East? First, social unrest is bound to increase in the region as the nexus of rising prices of fuel, growing populations, food inflation and other prices going up will create inflationary pressures. Indeed, food prices played an important role in the massive protests the Arab Spring, and the region may yet see a wave of upheaval, and possibly violence. Europe could face a double wave of refugees — from Ukraine but also from the Middle East as economic pressure on these countries grows.

Towson University Professor Robert Rook who specializes in Middle East history explained that politically and economically, this crisis will grow “exponentially,” and we are now only at the beginning of it.

Russian President Vladimir Putin is not one to let a refugee crisis go un-weaponized, and he will likely use the situation to press for his own advantages. He remains committed to dismembering Ukraine. Despite the Russian military’s extraordinary losses, Moscow continues its assault on eastern and southern Ukraine. If Russia succeeds in gaining control of Ukraine’s fertile farms lands and Dnieper River coastal industrial areas, Russia could potentially, over time, gain a better position in the grain market. This position would especially matter to the Middle East.

It is unclear what plans Western governments have in place to address the coming food crisis. Twelve of the world’s top 20 wheat exporters are NATO members. Thus, part of NATO’s response to Russia’s invasion of Ukraine needs to go beyond sanctions and take collective action to increase wheat yields in an effort to offset the losses incurred by Russian aggression as well as Russian attempts to project blame on the West.

The Indian government’s recent pitch to help feed the world certainly sounds positive in principle, but it remains unclear how India alone, with its own large population and its own food uncertainty, will help avert the coming crisis. Russia’s invasion of Ukraine has already upended the world. Unfortunately, what lies ahead may be even worse, especially if Putin gets even a partial win in Ukraine farmland. 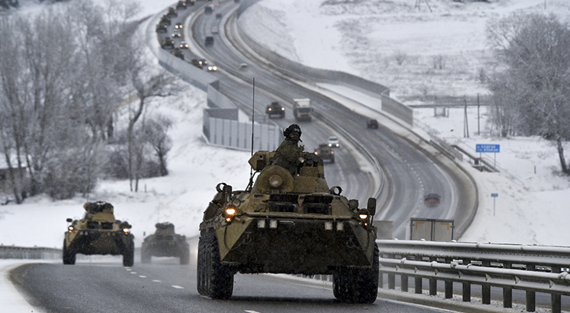