How Ukraine affects the Middle East

The Australia/Israel & Jewish Affairs Council’s first webinar this year was very topical – “Russia vs Ukraine: Implications for the Middle East”.

It was delivered by Anna Borshchevskaya, a senior fellow at the Washington Institute for Near East Policy, where she focusses on Russia’s Middle East policy.

She began by saying this is the most defining post-war crisis. Ukraine is at the heart of Europe and, being a democracy, historically a competitor with Russia in political ideas. For Russian President Vladimir Putin, this is about much more than just Ukraine. It is “about eroding the US-led liberal rules-based order. It is also about a lot more than

simply restoring the imperial tsarist lands or the Soviet lands … it is really about playing out the Cold War with an alternate ending. People like Putin in the KGB intelligence community could not forgive the loss in the Cold War.”

She explained that they highjacked Russian attempts at liberalism in the mid-1990s and then-Foreign Minister Yevgeny Primakov charted a vision of a multi-polar world rather than the US dominated global order. Putin learned from the USSR’s mistakes and is pursuing a whole of government approach, which she described as “multi-dimensional coercion – diplomatic, informational, economic and military, all of them supporting Russian political objectives.”

The West, she added, has been slow to wake up to this, using diplomacy where Putin has used coercion. Putin sees the West as weak, especially after the Afghanistan withdrawal, and has systematically proven it – in Georgia, Syria and Crimea.

However, now, she said, he may have bitten off more than he can chew, never previously having started a fight he couldn’t win. She said Putin and his circle didn’t expect so much resistance from Ukraine, but the crisis is with us to stay.

Turning to the effects on the Middle East, she said Putin now has a permanent military presence on the eastern Mediterranean due to his position in Syria, and will continue to use it to project power there and on the Black Sea, so the West needs to contest those bodies of water more effectively.

The Middle East and North Africa get a substantial amount of their wheat from Ukraine, Egypt and Lebanon more than half, and it passes through the Black Sea, so this will affect food security and food prices, including in Israel. She worries this may provoke unrest approaching the levels of the Arab Spring. There will also be gas supply issues.

Sanctions on Russia, she noted, would also affect the Middle East, because Russian banks operate there and a collapse in the ruble would affect Middle East financial markets. Tourism could also suffer, with the Middle East the top destination for Russian tourists.

She said Russia will never succeed in crushing the Ukrainian identity but, despite the resistance, Putin is not rethinking his decision, and it’s hard to see him backing down. He is on an almost Messianic mission to restore Russia’s greatness, so sanctions won’t stop him. Negotiations will happen, but Russia will only use them as a tactical pause to consider why the invasion hadn’t gone as planned.

She lamented that the West had done too little too late. It could now supply Ukraine with more offensive weaponry, possibly institute a no-fly zone over Ukraine, contest the Black Sea and the Mediterranean and Russian positions elsewhere more forcefully, and use Putin’s whole of government approach globally.

Russia and China, she said, will continue cooperating in the Middle East and elsewhere. Putin waited for the Olympics to end before invading, and China seems to be helping Russia evade sanctions. There are some differences though. China didn’t recognise Russia’s occupation of Crimea and abstained on the United Nations Security Council motion condemning Russia rather than vetoing it.

She added they both want a reduced US presence, a multi-polar world and an end to the liberal world order.

Joe Biden, she said, made a big strategic mistake when he said no US troops would go to Ukraine – he should have at least kept Putin guessing. Ukraine is a strategic partner, and countries should help their strategic partners.

She explained that Israel is in a tough position and must walk a fine line, because Russia controls Syria’s skies, so Israel needs Russian goodwill to strike Iranian targets there. Israel also has large Russian and Ukrainian populations. However, Ukraine is a fellow democracy, so morally Israel should be looking for ways to stand with it.

Morerover, she stressed, Israel needs to understand that Russia is not going to get Iran out of Syria, as some in Israel had hoped. It is one thing for Russia to let Israel bomb Iranian assets, but Russia relied on Iranian forces to allow it to control Syria. She concluded that Israel is strong and independent, and taking a principled position always pays off in the end

In relation to the JCPOA Iran nuclear deal, she said Russia acted as a participant, but at the same time, acted as Iran’s lawyer, extracting concessions for Iran. It also wanted increased trade with Iran. Russia would prefer Iran not to have nuclear weapons, she added, but would be far more concerned about a pro-Western Iran.

Russia could potentially link helping in the JCPOA negotiations with concessions on Ukraine, she warned, and said the West shouldn’t fall for this.

She is not sure Israel could mediate between the sides, because she doubts Russia would accept Israel in that role. Putin sees Russia as being above most states, having said very few states have true sovereignty, so would see having Israel in that role as beneath him. He especially doesn’t see Ukraine as a true country.

She said it is hard to predict how Biden will react to Israel’s stance, as a lot goes on in private. Ukraine offered to recognise Jerusalem as Israel’s capital in return for military aid, but Israel was too nervous to accept the offer.

Putin, she said, is so angry he’s almost deranged. He doesn’t have a stopwatch for when he wants to complete the invasion, but the West needs to push him to use more resources than he had planned, to give him a loss. The Russian military has much greater numbers and resources than Ukraine, but it’s not too late to give him a quagmire.

She doubts Putin would use tactical nuclear weapons, but isn’t sure. She is concerned that a lesson other countries, particularly in the Middle East, will be drawing from Ukraine’s plight is not to give up nuclear weapons as Ukraine did, which is a blow to the liberal world order.

The US-led post-Cold War international order isn’t over yet, she said, especially given how bravely Ukraine has fought, giving Putin cause to rethink future plans.

However, for Putin and his circle, the Cold War is not yet over , and the Western failure to sufficiently help Ukraine is an enormous blow to US credibility worldwide, like the Afghanistan retreat, and may show that defying the US pays off.

She added that, “it might not be the end of the liberal world order but we’re living in a fundamentally different, less secure world…and our elites need to rethink, need to really reassess and reabsorb some of the lessons of the Cold War and what it took to win, what it took to protect freedom unfortunately because the US-led global order has created such an era of prosperity and peace …unfortunately I think too many among our elites had forgotten…how hard you have to fight to protect the things that matter the most …perhaps this crisis will reawaken those memories and maybe we will find our elites will finally wake up to what an existential crisis this really is.”

Asked what Australia should do, she replied that it should look for ways to help Ukraine directly and indirectly, remain a strong Western partner in the Pacific and stand up to China, remind everyone we are a part of the family of democracies and remain a valuable ally. 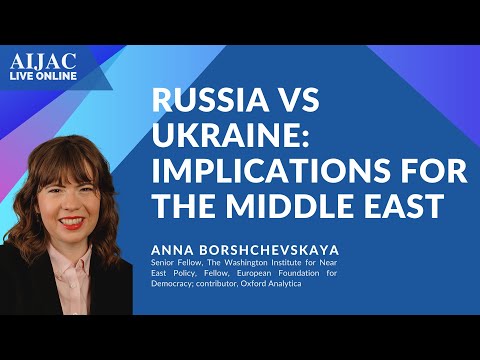