Is The West Losing The Battle Of Narratives In The Middle East?

Amid Western outrage at Russian President Vladimir Putin’s war in Ukraine, Middle Eastern views of the conflict are colored by attitudes toward the West itself. Arab narratives are typically ambivalent in their presentation of Western reactions. They include accusations of American hypocrisy and double standards.

Political cartoons offer unique insights into these perceptions. They also help show how the Middle East perceives itself within the broader great-power competition between the United States, Russia, and China.

Since the war in Ukraine began, Arab-language cartoons have offered divergent viewpoints on Russia’s actions. These range from neutral calls for negotiations to open condemnations of Russian atrocities – and of Arabs willing to praise a dictator such as Putin. Emirati newspaper al-Ittihad is illustrative of the first view. Its featured cartoons lack any attribution of victimhood or guilt. On the other hand, cartoonists such as Emad Hajjaj – regularly featured in the UK-based New Arab – openly condemn the Bucha massacre.

Hypocrisy Is the Theme

Despite the variety of views, however, a dominant theme has emerged in the Middle East – one that sees a profound imbalance between the West’s response to Ukraine and its reaction to other conflicts.

Arab cartoonists’ depictions of Western hypocrisy take front and center in many presentations of the war. Often cited is Syria, where bloodshed and atrocities have been worse so far than what we have seen in Ukraine. From a regional perspective, Europe has shown a double standard by opening its doors to Ukrainians more readily than to Syrians – or to refugees from elsewhere in the Middle East.

Then there is the Palestinian issue. Here, the region’s perception of Western hypocrisy takes center stage. In cartoons, international concern over other conflicts is pitted against approaches to the Palestinian cause, or seen as subservient to American control over world opinion. Indeed, Arab political cartoons repeatedly compare Ukraine and Palestine – in terms of the international perception of violence against occupying forces, or of refugees, or of the destruction of civilian buildings. When the Kuwaiti political satirist Shuaib conducts a mock interview with Ukrainian President Volodymyr Zelenskyy, the latter laments that Putin is shelling and destroying Ukraine while “the West has left me by myself.” Shuaib responds that it sounds like Zelenskyy wants to be bundled together with Syria and Palestine.

A Descent Into Whataboutism

However, a number of journalists in Western media have contrasted Ukraine with the Middle East using language that implies the suffering of Ukrainians is somehow worse. These attitudes have been duly rebuked. Numerous think-pieces have attempted to explain and understand this reporting gap, in publications such as NPR, Al-Jazeera English, and others. But the soundbites exist nevertheless, and they chip away at Western credibility. According to Google trends, the attention Americans have given to the war in Ukraine easily outpaces the attention placed on Syria from 2011 onward. Yet Russia’s role in Syria is no less destructive than its actions in Ukraine. In this sense, Arab cartoonists have a point.

But cartoonists’ accusations of hypocrisy sometimes descend into whataboutism. Carlos Latuff is a case in point. The Brazilian cartoonist, popular on Arabic social media, has dedicated much of his career to championing the rights of Palestinians and Palestinian statehood. Like others, Latuff has created a number of cartoons calling out hypocrisy by comparing Ukraine and Palestine.

However, Latuff has also tweeted views such as, “The war in Ukraine is probably the only one in which only one side’s version is taken into account. Ukrainian Nazi militias are heroes, and Russian troops are villains. Pure Western propaganda.” The outlet that regularly publishes his work, Mintpressnews, is also known for characterizing the chemical attack on Ghouta by Syrian dictator Bashar al-Assad as a false-flag operation. Here, Latuff’s apparent predisposition for Russian narratives warps reality. In fact, neither the West nor the Ukrainian government extol the very small neo-Nazi militias in Ukraine.

Looking at the bigger picture, many Arab cartoonists repeatedly portray the war in Ukraine as a conflict between two forces – the United States and Russia – trapping Ukraine and the rest of the world in their tussle. This criticism of great-power competition was a common theme before the war. Illustrative of the trend are images showing the United States and China trudging off toward another Cold War, or of four boots, belonging to Israel, the United States, Russia, and China, crushing peace. Criticizing the international community’s values, another image shows a Pinocchio-like world with “human rights” and “fighting poverty” scrawled across its lengthy nose.

In other words, Arabic media is likely to depict the war in Ukraine as a reflection of a broader, cynical struggle for control between great powers. This is a long way from the West’s impression of the war, wherein a free and peaceful nation defends itself against a bigger aggressor.

Understanding and addressing this perspective is important, especially since other state actors are happy to bolster these narratives in order to erode Western credibility. A lengthy Twitter thread from Cao Yi, a Chinese diplomat in Lebanon, is instructive. Along with memes comparing Ukrainians and Palestinians and critiquing U.S. interventionism, the diplomat tries to discredit all sorts of Western stances, from its accusations against Russia to Canadian Prime Minister Justin Trudeau’s support for protests in Hong Kong. In these cases, similar headlines belie the very different contexts of the cases they compare. There is no moral comparison between the bombing of Serbia, which followed its horrific attacks on Bosnia and Herzegovina, and Russia’s bombing of Kyiv.

And herein lies the lesson for the West. Moscow and Beijing can incorporate prevalent narratives from the Middle East into their own worldviews. The West cannot afford to  leave these narratives unchallenged, but it has yet to effectively express its own perspective. The West needs to highlight its rivals’ own hypocrisy to Arab audiences. 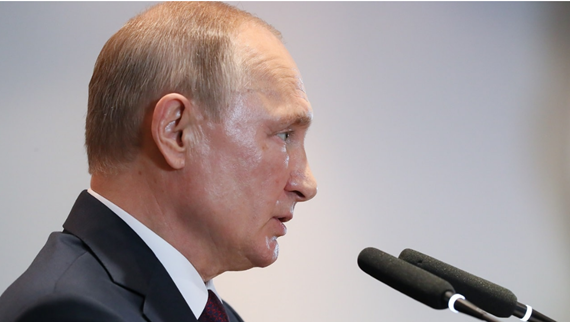