Israeli Prime Mnister Naftali Bennett says Israel is sending aid to Ukraine. At the weekly cabinet meeting, Bennett said his country hopes the Russia-Ukraine war will end soon and says israel is praying for the citizens of Ukraine.

"In the next two days, a plane carrying 100 tons of Israeli humanitarian equipment will arrive in Ukraine for civilians who are both in the battle zones and for those who are trying to leave. Water purification kits, medical equipment and medicines as well as tents, blankets, sleeping bags, and other equipment that can help citizens who are away from their homes in cold winter weather," Bennett said.

Bennett's offer stopped short of military aid but Israeli media reported he had offered to mediate between Ukraine and Russia.

Quoting an unnamed diplomatic source the Jerusalem Post reported that Bennett had offered to mediate between Russia and Ukraine. Bennett didn't mention it in his comments before the weekly cabinet meeting but his office said he had spoken with Russian President Vladimir Putin.

Israel condemned the Russian invasion of Ukraine on Thursday. Foreign Minister Yair Lapid also offered humanitarian aid to Ukraine. Without naming the countries, he urged Putin to back down.

“Israel is a country that has experienced wars, and war is not the way to resolve conflicts. The first hours and days of any war are also the last time you can still stop and return to the negotiating table, mediated by world powers, to settle disputes peacefully,” Lapid said.

Some analysts say Putin's goal goes far beyond that country.

“Putin of course, wants to destroy Ukrainian sovereignty, but this is not really about Ukraine,” said Anna Borshchevskaya, from the Washington Institute.

“This is about Putin, trying to play out the end of the Cold War with an alternate ending. It's about expelling the United States from Europe and changing the security architecture in Europe. It will have direct implications on the Middle East, but also globally,” Borshchevskaya told CBN News.

For Israel, the situation is like walking a tightrope between supporting democratic ally Ukraine and depending on Russia to ensure it can carry out airstrikes against Iranian proxies and installations inside Syria.

“The fact that Russia had a strategic success in Syria and was able to establish a permanent military presence, puts it in a better position to pressure Ukraine,” said Borshchevskaya. “I think you're going to see more Russian military activity in Syria and the Eastern Mediterranean.”

“Russia is in Syria since September 2015, when the Russian air force first deployed there and the Russians have basically saved the regime of Bashar Assad, and they are therefore in essence the de facto authority,” said Middle East expert Jonathan Spyer, of the Institute for Strategies and Securities.

Spyer says that is like Israel having a border with Russia itself.

“Israel is engaged in an ongoing air campaign to try to roll back Iranian efforts at consolidation and entrenchment in Syria, nothing can happen over the skies of Syria without tacit Russian permission, which means that the Israeli-Russian relationship is of paramount diplomatic importance to Israel right now,” Spyer told CBN News.

At the same time Israel is a key ally of the US.

“And Israel has its own values also. And absolutely is close to Ukraine also, which has of course, a Jewish, president. So it means that Israel is kind of torn between two imperatives right now,” Spyer said.

For now, Putin has his hands full with Ukraine. But if he achieves his goals there, Israel could find itself in an even more difficult security situation facing both Russia and Iran in Syria. 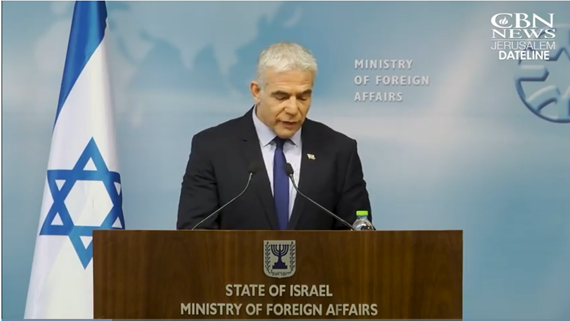