The message from Mariupol, Ukraine’s besieged port city on the Sea of Azov, was stark. “We’re still holding on,” a resident, Ihor, concluded his brief 34-word message.

He had struggled half-a-day to send the short text because of intermittent mobile phone communication. The Internet in the city of 400,000 is down and Russia’s bombardment has been relentless, he said.

Terrified residents of the city who are desperate to flee have twice been teased with the prospect of being able to evacuate through a humanitarian corridor. But twice their hopes have been dashed, the last time on Saturday when Ukrainian officials accused Russian forces of violating a temporary cease-fire brokered to allow safe passage for civilians.

Moscow accused Ukrainian “nationalists” of blocking civilians from leaving Mariupol and the neighboring small town of Volnovakha, and of using non-combatants as human shields.

That isn’t how Ihor sees it from the ground. “The Russians didn’t stop shooting,” he told VOA.

On Monday Russia’s defense ministry announced its forces will hold fire and open humanitarian corridors for several Ukrainian cities, including Mariupol and the capital Kyiv, which has seen no letup in days of intense shelling, a prelude to a redoubled ground attack on the city Ukrainian commanders fear.

Kharkiv, Ukraine’s second largest city, which endured another night of intense aerial bombardment, as well as Sumy, where there is fierce street fighting, are also on the list for humanitarian corridors. The Russian defense ministry declaration was prompted reportedly after French President Emmanuel Macron interceded with Russia’s leader Vladimir Putin during a long phone conversation Sunday.

But there’s skepticism in Mariupol and elsewhere that the humanitarian corridors will hold up and that Russian forces will pause fire long enough to allow civilians to flee.

Skeptics point to what they have endured on the ground since Russia launched its invasion of Ukraine 12 days ago, saying Russian forces have been deliberately targeting civilians and non-combatants and indiscriminately bombarding residential buildings and civilian infrastructure from the ground, sea and air.

They point to what happened Sunday on the outskirts of Kyiv in the satellite town of Irpin, where fleeing civilians were shelled as they made their way to a fleet of yellow buses local authorities had arranged for their evacuation.

The scene was captured on video by independent news organizations, including by reporters of The New York Times, with footage showing civilians throwing aside their suitcases and dropping stuffed plastic bags and diving for any cover they could find as Russian mortars landed.

A family of four were caught in the open with the impact of a mortar killing the mother and two children and seriously wounding the father, who later died. Nearby in a green pet carrier the family’s small dog barked either from shock or injury.

Ukrainian officials accused the Russians of purposefully shelling the civilians, saying Russian commanders knew they were non-combatants trying to use of an escape route as Russian drones had been flying over the area just moments before the thump and crump of mortars turned a road leading from a buckled bridge into a killing zone.

“They are shelling us without mercy,” a shell-shocked Marina Starodubtseva told reporters on the scene as she dragged her young daughter onto a bus and as Ukrainian territorial defense force volunteers assisted the elderly and infirm over a nearby guardrail.

But Ukraine’s President Volodymyr Zelenskyy highlighted the shelling in Irpin in a video message posted on Telegram. Noting that it was the last Sunday before Orthodox Lent, Ukraine’s leader said: “Today is Forgiveness Sunday. But we cannot forgive the hundreds upon hundreds of victims. Nor the thousands upon thousands who have suffered.”

Humanitarian corridors are notoriously difficult to get set up and for warring sides to observe as they fear their opponents will use the pause in hostilities to regroup, reinforce and maneuver to gain a military advantage. In his conversation with Macron Sunday, Putin alleged that was what the Ukrainians were doing in Mariupol and was why the temporary local cease-fire broke down.

Nicholas Williams, a former British representative to NATO, thinks there “isn’t enough trust between the two sides to make it happen.” That’s a neutral explanation, he said. “Often the lack of trust, lack of communication, means that one side has a suspicion that the other side is using the cease-fire in order to regroup and potentially attack,” he said.

But veteran observers of Russian military tactics in Syria accuse Moscow of being cynical in its use of cease-fires and humanitarian corridors. “Russia played on a game of allowing humanitarian corridors and then closing them and denying access in and out,” says Bassam Al-Kuwatli, managing director of RMTeam International, a research and development company based in Turkey.

Anna Borshchevskaya, a senior fellow at The Washington Institute, a think tank based in the US capital, has studied Russian tactics when it comes to cease-fires and says they are used by the Kremlin as a tactic of war. In a commentary last week, she said: “Putin’s deep experience with manipulating cease-fires and humanitarian agreements in Syria gives ample reason to believe he will do the same in Ukraine.”

She added: “When the Kremlin engages in negotiations it is a tactic for buying time, repositioning their operational forces, and achieving greater strategic leverage. Russia has no disconnect between those who do diplomacy and those who go to war, unlike in the West. It utilizes the entirety of diplomatic, informational, military, and economic activities to pressure its opponent’s resolve.” 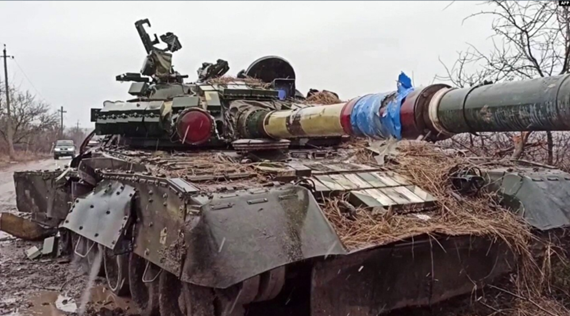