Iranian proxy in Lebanon, Hezbollah has been gradually expanding its narco-network in a number of continents and countries. According to a recent announcement of the Australian Border Force, a man has been jailed in Australian following an international, multi-agency investigation into the importation of 188 kilograms of cocaine supplied by a Mexican drug cartel in 20019.

Detailed the incident, the announcement said:

The man was sentenced on August 19 to nine years’ imprisonment, with a non-parole period of five years by the Downing Centre District Court, New South Wales.

Police investigating the 2019 cocaine import observed the man moving hundreds of aluminum ingots and attempting to access the cocaine he believed was hidden inside them.

He was already in prison for an unrelated matter when police served him with a court attendance notice in March/April 2021 for his role in importing the cocaine, which had an estimated street value of US$47 million.

The Australian Federal Police (AFP) estimates this seizure saved the community more than US$120 million in drug-related harm, including associated crime, healthcare and loss of productivity.

“The high demand for cocaine in Australia is at the forefront of our battle with organized crime syndicates; they see that big dollar sign over Australia and know the profit they can make is substantially more than any other target market”, Det. Act. Supt Wilson said. “Law enforcement cannot win this fight alone. As a community, we need to continue educating each other about the high risks associated with illicit drug use; to reduce the harm, demand and ultimately the profit going back to organized crime”.

“Like this seizure, forensic drug profiling of cocaine found here in Australia continues to show most originates from Colombia and other areas of South America”, Det Supt Watson said.

“The illicit cultivation of coca bush in these areas significantly impacts upon local indigenous communities and nearly half is carried out in areas with special environmental protection status.

“The reality is that by partaking in both the importation or recreational use of cocaine here and overseas, you are supporting the proliferation of serious crime around the world and the devastation of other people’s lives”, Det Supt Watson said.

ABF Enforcement Operations East Acting Commander, Hany Elbatoory, said the ABF would continue to make it as difficult as possible for criminal syndicates to illegally import illicit drugs such as cocaine into Australia.

“The ABF has significant skills, technological capability and targeting methods when it comes to detecting drugs at the border”, A/g Commander Elbatoory said.

“Those who choose to be involved in this kind of activity can expect their illicit goods to be detected and stopped at the border, and receive significant criminal penalties for their actions”.

“US Homeland Security Investigations stands shoulder to shoulder with our Australian law enforcement partners to ensure that communities are kept safe from the importation of dangerous drugs”.

Australian authorities did not specify one important point. Who are behind this massive narco-case. It may be mentioned here that, Hezbollah is known to be involved in the cocaine trade and hashish trade. This Lebanese terrorist group uses the drug trade as well as other criminal enterprises to fund its militancy excursions in Lebanon and beyond. Hezbollah also uses its illicit profits to fund other terrorist and jihadist entities like the Taliban, while some of their funds go to radicalization project mainly targeting children.

In November 2018, following an investigation by the US Drug Enforcement Administration (DEA) called “Operation Cedar”, Lebanese nationals, accused of having links to Hezbollah went on trial for laundering millions of euros in South American drug money to Europe and Lebanon. According to a research conducted by the Abba Eban Institute as part of an Initiative called Janus, some of the individuals arrested in “Operation Cedar” were Hezbollah operatives involved in money laundering and narcotics trafficking. The research also found that Hezbollah is financed through non-profit organizations such as the “Orphans Project Lebanon”, a German-based charity for Lebanese orphans. It found that it had been donating portions of its contributions to a foundation which finances the families of Hezbollah members who commit suicide bombings. The European Foundation for Democracy published that the “Orphans Project Lebanon” organization directly channels financial donations from Germany to the Lebanese Al-Shahid Association, which is part of the Hezbollah network and promotes suicide bombings in Lebanon, particularly among children. In Germany, financial donations to the Orphans Project Lebanon are tax-deductible and thus subsidized by the German State’s tax policy.

On October 21, 2008, the Los Angeles Times reported that an international cocaine smuggling and money laundering ring with alleged connections to Hezbollah was dismantled in Colombia. It is claimed that 12 percent of the group’s profits went to fund Hezbollah, although no dollar figure was specified.

A separate report claimed that the joint operations between the United States and Colombia resulted in the arrest of nearly 130 individuals suspected of being members of a cell formed from an alliance among a famous Colombian drug syndicate known as “North Valley”, an armed leftist militant organization composed by former and current members of FARC, and a group of smugglers of Lebanese origin. Two years before, the United States and Colombia had launched a joint investigation, known by the operational codename “Titan”, with the goal of pursuing networks that smuggled drugs from Colombia to the US, Europe and the Middle East. The investigation soon centered on the leader of the “North Valley” group, an individual of Lebanese origin called “Shukri Harb.” Harb’s network supplied 12 per cent of its revenues in cash directly to Hezbollah.

A June 25, 2009 article published by the Jamestown Foundation, a Washington, DC think tank, reported on the allegations connecting Hezbollah to drug trafficking and money laundering incidents in Curaçao in April 2009 and previous incidents linking Hezbollah to cocaine and money laundering rings dismantled in Colombia and 2008 and a similar ring dismantled in June 2005. The article takes a critical approach to these allegations by questioning the veracity of accusations linking Hezbollah to the drug trade in the Americas. The article also reported that Lebanese organized crime groups are likely to be responsible for drug-related activities in the region and that solid evidence proving the Hezbollah angle to drug-related activities never emerges.

According to the Arab Times, When Saudi Arabia banned the import of Lebanese produce in April 2021 because these shipments were being abused to smuggle narcotics into the Kingdom, Hezbollah found itself with a problem.

Following the collapse of the Lebanese and Syrian economies, Assad family mafiosi and Hezbollah set about remodeling their nations as narco states — world production centers for the amphetamine-based drug Captagon, a favorite among partygoers and terrorist groups. Syria’s Captagon trade is estimated to be worth over a billion dollars a year.

Captagon production had become established in areas such as Homs and Aleppo, but given Syria’s extreme dysfunction, many major factories have been reconsolidating themselves along the Lebanon-Syria border, particularly in Hezbollah strongholds such as Qusair and the Bekaa Valley. Lebanon’s former Justice Minister and security chief, Ashraf Rifi, describes a “partnership between Hezbollah and the Syrian side in terms of manufacturing and smuggling” Captagon. This is in addition to Syria and Lebanon becoming favored routes for heroin, crystal meth and hashish.

Since the GCC shipping ban, Hezbollah has resorted to diverting these illegal shipments via transit states to obscure the country of origin, once again exploiting its connections with the worldwide Lebanese diaspora. West Africa has become a preferred option, with 450,000 Captagon pills turning up at a port in Lagos, discovered as a result of Saudi-Nigerian cooperation. GCC authorities have also discovered millions of Captagon pills in West African shipments of cocoa, with Syria almost certainly the original point of production.

This isn’t the first time Hezbollah has embroiled West Africa’s Lebanese communities in the narcotics trade. During the 2000s, Hezbollah and Iran found themselves with a different problem: Thanks to President Mahmoud Ahmedinejad’s outreach to Latin American states, Hezbollah began reaping billions of dollars from cocaine, but it had no means of repatriating these funds to Beirut and Tehran. It hit on an ingenious idea: Investing the money in tens of thousands of second-hand American cars that were then shipped to Benin, where hundreds of Lebanese expats set themselves up in the West African car market. The proceeds from these sales were then repatriated to Lebanon.

Cote d’Ivoire has an 80,000-strong Lebanese diaspora who dominate about 50 percent of the economy, while Hezbollah-affiliated mafia elements play major roles in the narcotics trade. Cote d’Ivoire is a major transit point for money laundering, with numerous instances of youths being stopped trying to carry suitcases containing millions of dollars back to Lebanon. Other West African states such as Guinea, Togo, the Congo, Guinea-Bissau and Sierra Leone, have played pivotal roles in Hezbollah operations, involving money laundering, weapons proliferation, drugs and organized crime.

One 2021 calculation suggests that this activity nets the group about $1 billion a year, probably in the same ballpark as the stipends Hezbollah receives from Iran. With the annual worldwide narcotics trade worth about $500 billion, this could be a gross underestimate. As Lebanon’s economy continues its remorseless slide, the day may come soon when this Hezbollah black economy comes to dominate Lebanon’s markets, with the risk that country permanently descends into being a narco-state.

Iran and Hezbollah are meanwhile involved in millions of dollars’ worth of weapons shipments, to Yemen, Africa, Iraq, and a host of other war-wracked states. Thus we have a perfect storm, with the narcotics trade being used to fund terrorism and paramilitarism. Yet still I encounter a remarkable lack of curiosity about these issues among diplomats and journalists.

For the past few years, Hezbollah has established links with Myanmar-based Yaba, a combination of methamphetamine (a powerful and addictive stimulant) and caffeine which is being trafficked into the US, Britain, European countries, the Middle East and several Afro-Asian nations, including the Philippines, India, Sri Lanka and Bangladesh. According to statistics on transnational drug trafficking, Hezbollah has already established Yaba production facilities in Colombia and Mindanao province in the Philippines, wherefrom this particular type of dangerous drug is being sold to transnational narco-trafficking cartels. 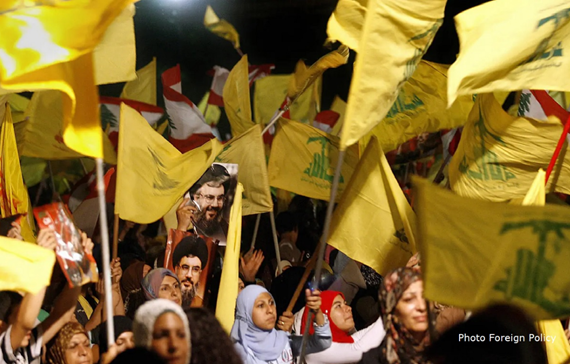