Putin ‘throwing everything he can at Ukraine’ with Syria fighters

Russia is allegedly recruiting foreign fighters from Syria for its war with Ukraine, according to Washington officials - and experts say the move arrives as Moscow attempts to recalculate its approach to the conflict.

“There are a lot of unanswered questions here about exactly what impact this will have, how this is going to go and so forth, how effective will these fighters be - but it shows you that (Russia's President Vladimir Putin) is basically throwing everything he can at Ukraine,” the expert said.

Reportedly, Syrian mercenaries are being offered a few $100 to take part in this war.

Though it is unclear what kind of role these foreign fighters could play in Ukraine, analysts are also observing a number of similarities between Moscow’s operations there and its bombing campaigns during the Syrian Civil War.

“Syria was in fact a very important training operation essentially for the Russian military,” Borshchevskaya told i24NEWS, adding that its strikes on civilian centers intend to demoralize opposition forces.

The fellow explained that the report arrives as Russia attempts to recalibrate its military calculus in Ukraine amid unanticipated setbacks.

“It’s definitely not going as planned, and (Putin) understood… that this is not the way it was supposed to go.” 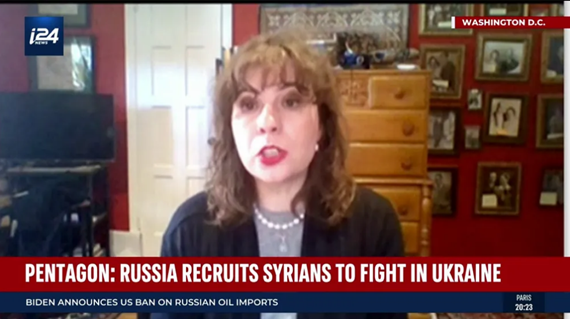