Europe is facing multiple threats at present. An insecure but threatening Russia, which has shown its willingness to illegally annex sovereign territory with no regard to international law, and China, rapidly growing in economic and military strength, and in ambition. To this we can add a virus that is both crippling national economies and undermining European unity.

Europe is facing multiple threats at present. An insecure but threatening Russia, which has shown its willingness to illegally annex sovereign territory with no regard to international law, and China, rapidly growing in economic and military strength, and in ambition. To this we can add a virus that is both crippling national economies and undermining European unity.

This week the Brussels-based European Foundation for Democracy (EFD), in cooperation with the US Mission to the EU and the European Values Centre for Security Policy, brought together three experts in the field to discuss the current situation.

Jakub Janda, Director of the European Values Centre for Security Policy, emphasised that whilst there are similarities between the tactics of the the two, both Russia and China are exploiting the present COVID-19 pandemic in clearly different ways.

Whilst China is generally considered to be culpable for the outbreak, Beijing is seeking to make political capital from the crisis. By directing aid to the west - notably to Italy which dramatically became the epicentre of Europe’s crisis with the outbreak in Milan - China became the saviour.

Indeed, Italian Foreign Minister Luigi Di Maio, hailing the arrival of a Chinese aircraft carrying nine doctors and medical equipment to help fight the outbreak in early March, appeared to rebuke the EU at a point in the timeline when the European Commission appeared impotent.

"Many foreign ministers offered their solidarity and want to give us a hand ... and this evening I wanted to show you the first aid arrived from China”, Di Maio said.

This gesture served to undermine both the Commission and the Italian government itself, whilst placing China centre-stage in the fight against the virus.

The fact that China had itself previously received PPE from Italy served to reinforce the narrative as one of unity and trust.

Russia attempted to emulate this particular play, but the poor quality of equipment supplied, along with an awareness that Moscow was covering up the true scale of its own outbreak, meant the gesture fell somewhat flat.

Moscow instead concentrated on its tried and tested formula of sowing seeds of disinformation and confusion in order to encourage citizens in the west to question their own governments.

Of particular success for Russia however has been the anti-vaccination (“anti-vax”) propaganda campaign that has been in place for more than one year.

By inflating and repeating a myriad of arguments and theories, often contradictory, Russia was able to chip away at confidence in vaccination so successfully that in the U.S. many shunned vaccines to the point that in 2019 the country experienced its worst Measles outbreak for 25 years.

The channels and networks that sprung-up through the anti-vax campaign were the same ones subsequently used to spread theories suggesting that COVID-19 was spread via 5G masts. That such an untenable theory could spread to the point where 5G masts were being targeted and destroyed by protestors illustrates how receptive citizens can be to any information that appears to fill in the gaps. In the absence of reliable information, conspiracy theories flourish.

Europe should stand up for our values. We face a systemic confrontation as that between the west and the Soviet Union. We are at the beginning of such a confrontation now, and neither China nor Russia wants it to go away.

Unlike China, which seeks to buy trust, and pressure western actors into silence over its ongoing human rights record - and of course at this moment the attention of the world is on unfolding events in Hong Kong - Russia is, according to Dr. Balkan Devlen, Senior Fellow at the Macdonald-Laurier Institute, focussed on regime protection. Vladimir Putin, he stated, sees the very existence of Liberal Democratic polities on Russia’s borders as a threat.

At a time when Russia’s power is declining relative to that of an ascendent China, Moscow seeks to punch above its weight, and to extend its control over what it sees at being its “sphere of influence”. It is therefore very much in Putin’s interest to keep the west busy with its own problems to pay too much attention to what Russia is doing.

He emphasised the important role played by Russia’s state-controlled media outlets in propagating the myriad of theories introduced into the narrative by the Kremlin and its agents.

The need for Europe, and the EU in particular, to stand up to both Russia and China was emphasised by the panel. Lithuania, with its population of less than 3 million, maintains a solid position on Russia, and Australia, despite an economic dependency, will not allow itself to be bullied by China.

The EU however appears to be lacking in the same moral fibre. 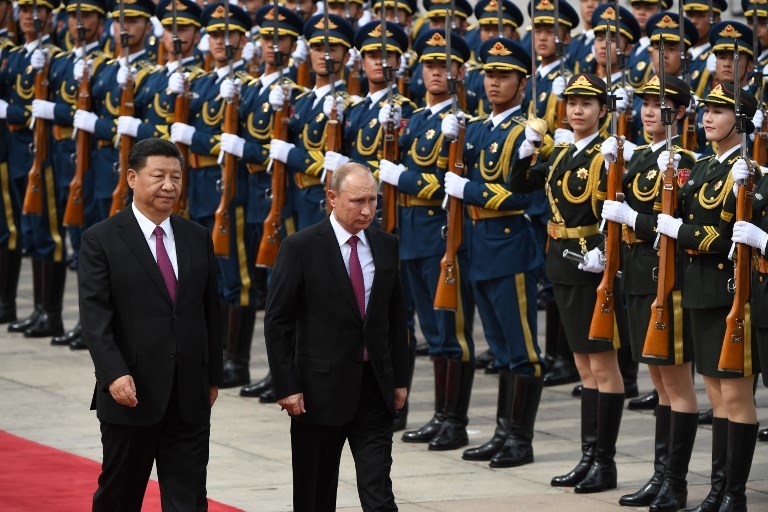