Russia in the Middle East: A Source of Stability or a Pot-Stirrer?

If Washington continues to deprioritize the Middle East, Russia will accelerate its convergence with Iran and essentially determine Syria’s future, which could result in a more explicit and dangerous nexus between these actors.

If Washington continues to deprioritize the Middle East, Russia will accelerate its convergence with Iran and essentially determine Syria’s future, which could result in a more explicit and dangerous nexus between these actors.

The Middle East has always been part of Russia’s vulnerable underbelly: a region the Russian state sought to secure as it pushed to play a key role in European politics and gain great power recognition. Since officially coming to power in May 2000, if not before, Vladimir Putin worked to return Russia to the Middle East as part of his zero-sum approach to international politics. Putin’s military intervention in Syria in September 2015 to prop up dictator Bashar al-Assad shocked and surprised many, but it was the logical conclusion of years of broader aims to deter the West in a context of dithering Western policies.

Unlike the former Soviet Union, Putin cultivated and continues to cultivate all major actors even as they oppose one another. It is a more pragmatic, flexible approach than that of the Soviet Union’s ideological approach, which had clear allies and adversaries. Putin’s strategy has been successful especially given the ambivalence of Western commitments to the region. Thus, Moscow maintains good relations with Iran and its proxies, Israel, and the Gulf—to name but a few—and tells each side it can play peacemaker. Moscow utilizes all tools in its state toolkit to build pragmatic leverage—not only through the military but also para-military, intelligence, trade, and soft power.

Moreover, Putin had come to perceive the West as weak—especially after President Barack Obama drew but did not enforce a red line in Syria in 2013—and it is likely for this reason he felt confident to intervene in Syria militarily. American ambivalence helped Putin make inroads in the region. Moscow’s approach to the Middle East is zero-sum: for Putin to win, the West has to lose. Putin is also not seeking genuine stability—on the contrary, low-level instability puts him in an advantageous managerial position.

Syria is the epicenter of Kremlin activity, which Putin uses as a springboard to project power throughout the region and Europe and Africa. Nothing makes as clear a statement about Moscow’s interests as the recent unveiling of a monument to the patron saint of the Russian army, Prince Alexander Nevsky, at the Russian Khmeimim airbase in Syria. This demonstrates Russian commitment on a symbolic as well as practical level. And symbolism resonates both in the Middle East and Russia.

Of course, militarily, Russia is in Syria to stay for at least the next forty-nine years, as per an agreement between Moscow and Damascus. In this time, Moscow continues to take practical steps on the ground to vie for influence in Syria and push for its preferred outcome. Syria’s strategic location on the Eastern Mediterranean allows Russia to project power into NATO’s southern flank and, more broadly, southern Europe. In this context, the oil-rich and strategically-positioned Libya was the next logical step, as I wrote in early 2017. Indeed, Russian activity there became more explicit in recent years both on the diplomatic front—as Moscow aimed to position itself as a mediator—and with more visible and increased deployment of so-called private military contractors such as the Wager Group.

While Moscow’s interests are primarily geopolitical, there is also a commercial aspect—mostly concerning energy and arms—in addition to cultural and religious dimensions. And although Putin works to build ties with everyone—not an easy balance to maintain—the balance is still tipped in favor of anti-American forces, Iran and its proxies, and Assad.

The US under Biden has yet to announce its Syria policy, but Damascus is unlikely to be a priority, which will only continue to help Putin. While many details are unclear, from a broader perspective, the US continues to deprioritize the Middle East in favor of great power competition with China and Russia in other regions. In contrast, Moscow sees the Middle East as a prime arena for this joust. If this trend continues, Russia will continue its already deep convergence with Iran and its proxies and will ultimately have the final word on Syria’s future. This could lead to a more explicit rise of a Russia-Iran-Assad nexus and transform the Middle East in a way that could create more vulnerabilities for the West and its allies, both in the region and in Europe. Such a scenario could only hurt broader American competition with China and Russia. 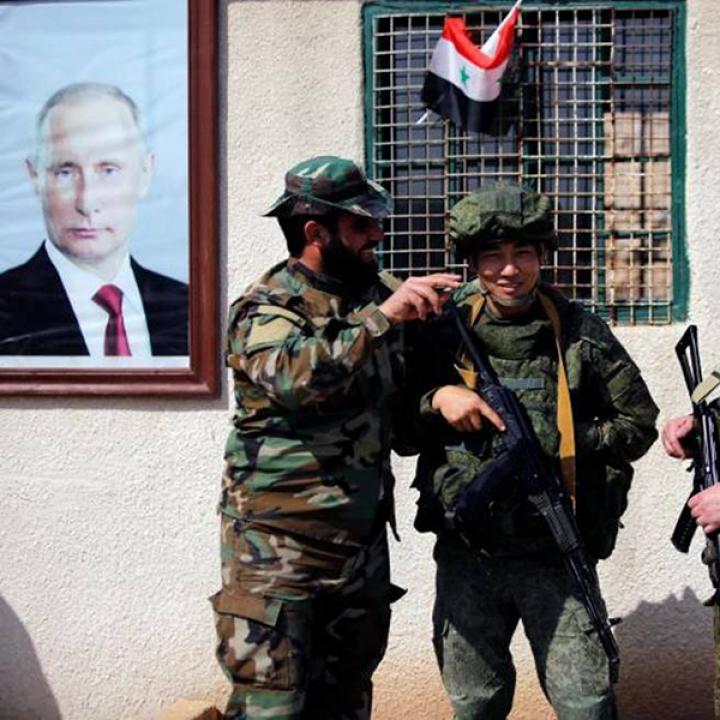