Russia ‘tolerates’ Israeli strikes in Syria, but has little appetite to restrain Iran

Russia's goal of remaining the strongest player in Syria may be aided by Israeli strikes, but analysts and officials say they are now hitting dangerously close to home

Russia's delicate balancing act between Tehran and Tel Aviv faced fresh scrutiny on Tuesday as an air strike, reportedly launched by Israel, destroyed what analysts believed to be Iranian military assets in the port city of Latakia, raising  questions about Moscow's appetite to restrain Iran as its shadow war with the Jewish state heats up.

Russia has leveraged its 2015 military intervention in Syria, widely credited with turning the tide of the civil war in favour of Bashar al-Assad’s government, to project power throughout the region, fashioning itself as a pivotal actor that can communicate with all sides, from Erdogan's Turkey to Syria's Arab neighbours.

But Russian warplanes were only one part of the equation that saved the Assad government, whose depleted military ranks were filled by Iranian ground forces and allied militias.

“It’s clear who Assad owes his survival to and it's clear the Iranian tentacles are entrenched in Syria."

Indeed, as Russia developed its own assets in Syria, strengthening control over its warm-water naval base in Tartus and deploying S-400 missile systems to challenge NATO, Iran embedded itself with an eye towards using the country as a launching pad against its arch-rival Israel.

Syria has become a linchpin in a corridor stretching from Tehran to the Mediterranean Sea and connecting Iran with its Lebanese-proxy Hezbollah.

Israel has launched hundreds of airstrikes in Syria aimed at preventing Iran from taking advantage of the country's chaos to recreate the model it achieved in Lebanon, where Hezbollah is believed to maintain around 100,000 missiles.

While this is not Moscow's war, analysts and officials say this conflict has put pressure on Russian President Vladimir Putin and his stated goal of achieving stability in Syria.

“Russia didn’t intervene in Syria to give Iran a platform to attack Israel,” James Jeffrey, a former US envoy to Syria, told MEE. “At the same time, they don’t want Israel striking in Syria at will."

Russia and Israel have sought to manage the situation and in 2015 established a hotline to avoid clashes in the Syrian airspace.

Yet, things have not always progressed smoothly.

In 2018, Russia accused Israeli fighter jet pilots of "hostile" actions that were responsible for Syrian air defence systems shooting down a Russian plane, leading to the death of 15 service members. On the back of increased tensions, Russia later announced it would provide Syria with S-300 missile systems to defend against Israeli airstrikes.

While it has publicly condemned Israeli strikes as a violation of Syria's sovereignty, it has been careful to avoid escalating tensions over them.

"The fact that Russia has accepted the notion that this is what we are doing, tells you quite a lot about their respect for our military capability," Eran Lerman, a former deputy director at Israel’s National Security Council, told MEE.

When Israeli missiles slammed into Latakia on Tuesday, Syria’s air defences were not activated. The Russian defence ministry said this was because a Russian military aircraft was landing at its nearby Hmeimim airbase.

Lerman said he would not get into the specifics of how the hotline between Israel and Russia functions, but that Israel is, “committed to ensuring they do nothing that ends up killing Russians on Syrian soil,” and part of that process is to make certain ahead of time that Russian aircraft are not in the areas Israel is targeting.

Despite Russia having advanced air defence systems in Syria, like the S-400, Israel has long enjoyed freedom of action in the skies above the country, leading some to speculate that Russia may actually welcome the strikes.

In a speech earlier this month, former Israeli national security adviser Meir Ben-Shabbat hinted that Moscow's position on Iran is closer to Israel's than "what is publicly exposed” and that both countries view Iran as a threat to regional stability.

Israel has long said that it is not seeking to oust Assad from power and that it can work with Moscow to limit Iranian influence in the country.

“We actually have a common interest in reducing Assad’s dependence on Iran,” Lerman said.

He added that the constant pressure from Israeli air raids, combined with the more recent initiatives by Arab states to normalise ties with Syria, may offer Assad an alternative to Iran, and one that Russia can promote.

“Moscow does whisper in Assad’s ear that to commit completely to Iran’s interests in the region is to take risks with Israel that are not healthy for him,” he said.

But such attacks also present a challenge for Russia.

Borshchevskaya, at The Washington Institute, said the most striking part of Tuesday's missile attack was how close Iran was able to position its assets next to a key Russian military base.

The strike marked the second time in less than a month that Latakia, Syria’s main commercial artery, was targeted, and comes after nearly 30 Israeli air raids on the country this year.

“Russia tolerates these strikes, it doesn’t favour them,” Jeffrey said. “And as the strikes become larger and begin to impact not just Iranian, but Syrian equities, Russia is liable to be more nervous.”

While many observers agree that Russia does not want Iran to grow too strong in Syria, and has been willing to turn a blind eye to the targeting of its military assets, they say it is unlikely to break with Tehran.

“The first thing Assad is going to do if Russia tells him to kick out the Iranians is ask for a division of Spetsnaz [Russian special forces] in Syria, and that’s the last thing Putin wants,” Lerman said.

On the ground, there are also few signs that Russia has been able or willing to restrain Iran.

A 2018 ceasefire brokered by Russia collapsed earlier this year in the southern province of Daraa, leaving the way open for Syria’s notorious 4th Armoured Division to lead an assault on the area in coordination with Iranian-backed militias.

The sheer volume of Israeli strikes on Syria and the magnitude of the recent explosions in Latakia also appear to indicate that Russia has not stopped the flow of military assets from Iran into the country.

“Russia wants everyone to be in a weaker position than it in Syria, that’s ultimately to its advantage, but it is still intent on cooperating with Iran even if they have disagreements,” Borshchevskaya said. 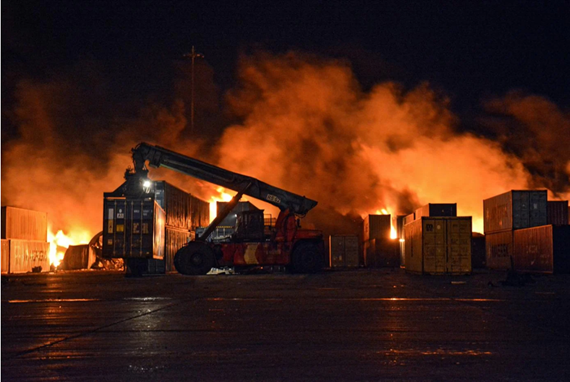