In response to Western sanctions over its invasion of Ukraine, Russia has blocked hundreds of ships mostly containing Ukrainian grain exports in the Black Sea and the Sea of Azov. Despite the blockade, observers have noted near-normal rates of shipping activity throughout the area. Key regional player Turkey has so far refrained from taking on a decisive role in stopping potential theft of the grain.

The blockade risks causing a global food crisis as Ukraine is one of the world’s top agricultural suppliers, exporting upwards of 25 million tonnes of grain and other goods to international markets.

Some analysts say that Russia is using food as a weapon of war. The European Union hopes to overcome the supply problem by creating a land corridor to Poland’s Baltic Sea ports that would allow Ukraine’s vital food exports to reach the rest of the world.

The number of ships on the route is nearly the same as before the war at 40,000, according to experts.

According to Vasyl Bodnar, Ukraine's ambassador to Turkey, the problem is that Russia is taking advantage of the blockade it has imposed to "steal Ukrainian grain and send it overseas from Crimea, including to Turkey".

"In May alone, we counted at least 10 passages including two round trips from three vessels flying the Russian flag ... Not to mention those that we would have collectively missed."

According to an article in The Hill by Garrett I. Campbell, a retired US Navy captain, and Anna Borshchevskaya, a senior fellow at the Washington Institute for Near East Policy, one solution to this blockade could be to reflag international merchant vessels, meaning to have these ships fly flags from countries with which Russia has ties and thereby recommence international exporting that way.

Although Turkey has officially condemned Russia’s offensive in Ukraine, it has positioned itself as a neutral mediator and refused to join the West in implementing sanctions against Moscow.

Turkey is a key regional player thanks to the 1936 Montreux Convention regarding the Straits, an international agreement that could play a decisive role in the Ukraine conflict since it allows Turkey to decide if, and which, civilian vessels and military warships can pass through the Dardanelles and Bosphorus straits, which form the seagoing link between the Black Sea and the Mediterranean.

After Ukraine asked Turkey to intervene to maintain regional peace, Ankara agreed to close the straits to Russian warships in late February. Russian ships had entered the Black Sea in early February and Turkey said it would not prevent Russian warships from entering the sea if Russia claimed they were returning home. A diplomatic source in Ankara added that Turkey is not legally entitled to intercept commercial ships or search them.

"We don't follow the ships on their way out of the Straits. We monitor them 10 kilometres before they enter and 10 kilometres after they leave," the source told AFP on condition of anonymity.

Elizabete Aunina, a researcher at Amsterdam University, told AFP: "If we look at the vague words of the Montreux treaty, it leaves a lot of room for interpretation."

"It did not foresee that merchant vessels could be carrying stolen goods... Turkey has before showed a certain commitment to sticking to the very basic interpretation of the Convention as a way to also protect itself from entering deeper into the conflict."

The European Union has imposed an embargo on Russian imports but tankers flying Greek and Maltese flags can be seen sailing through the Bosphorus up to the Black Sea and heading to Russian ports.

From his terrace overlooking the Bosphorus, Yoruk Isik, a 50-year-old Istanbul-born geopolitical analyst, has been observing ship movements on this key waterway between the Black Sea and the Mediterranean for the past decade.

Isik uses a combination of real-time tracking applications, a strong network of observers, and Russian and Ukrainian activists as well as satellite images to keep an eye on vessels.

Some freighters loaded the wheat at Ukrainian ports that were under Russian blockade such as Odesa, Chornomorsk and Mariupol, he said.

These ships are bound for Syria, where Russia has an operational base, and then either Lebanon or Egypt, two countries that normally buy 81% and 85% of their grain, respectively, from Ukraine and are facing a food crisis as a result of this war.

Isik also saw a flotilla of old Turkish boats that have "never been seen before in the area" suddenly appear under another flag in the Russian port of Novorossiysk, which are "likely under contract with the Russian government".

He gives a few examples of others : Kocatepe (now Tanzania), Barbaros (Equatorial Guinea), Hizir (Malta) and Sampiyon Trabzonsport (Cameroon). Isik, who has a list of the cargo ships that belong to the Russian defence ministry and those of the private companies operating on its behalf, feels that "what is happening is unacceptable".

Africa has also been severely affected by the war in Ukraine. When Macky Sall, Senegal's president and the current head of the African Union, met with Russian President Vladimir Putin on Friday he said Russia’s blockade of Ukraine and its grain exports had worsened food crises in Africa. But Sall also acknowledged that Western sanctions on Russia had aggravated Africa’s lack of access to grain.

Many African countries have longstanding ties to Russia, some of which date back to when the Soviet Union supported these countries’ wars of independence against their colonial rulers. Putin has made sure to cultivate these relationships and thus has managed to avoid the ire of many African countries regarding the war in Ukraine.

Russian Foreign Minister Sergei Lavrov will visit Turkey on Wednesday, June 8, to discuss the possibility of establishing "sea corridors" – although Russia is secretly exporting Ukrainian wheat for its own benefit, according to some analysts.

"This is the information we get but we cannot stop, or check, or question the intention of any cargo ship except if we feel a threat to Turkish peace or security," the diplomatic source said.

"If Russia exports Ukrainian products, nobody authorises Turkey to stop the vessels," said Yucel Acer, an international law professor at the University of Ankara.

The European Commission, however, is preparing its response, said a source in Brussels when their vessels are caught in the act.

"Most of these vessels are covered by European and British insurance: with this new package, they will no longer be able to use them," said the source. "This should have a significant impact."

But Turkey could do more, said Aunina of Amsterdam University.

"Following the annexation of Crimea (on 18 March 2014), Turkey technically banned ships from Crimea in its ports," Aunina said, adding: "This could be done as well."

Before the war, Ukraine was on track to become the world's third-biggest exporter of wheat. Africa and the Middle East both consume more bread products than other parts of the world and so are heavily reliant on Ukrainian exports. Africa imported $1.4 billion in wheat from Ukraine between 2018 and 2020, representing 12% of its wheat imports. 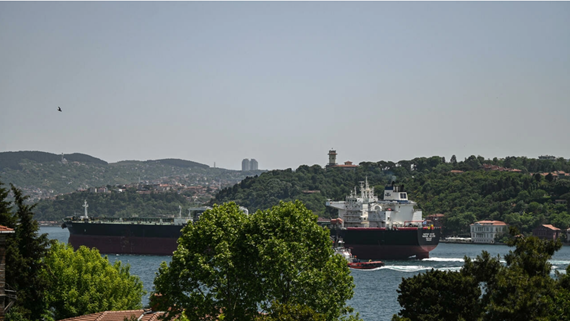