“Teaching democracy is just as important as teaching maths”

Psychologist Ahmad Mansour is an expert in deradicalisation and prevention of extremism. Himself a migrant, he came to Germany in 2004 as an Arab Israeli. He arranges projects against extremism in schools and prisons and provides support for radicalised young people and convicted offenders. In an interview with D+C/E+Z he describes how government and society can address and prevent extremist tendencies among young immigrants.

by Ahmad Mansour, Sabine Balk / Photo credits: "Workshop for young refugees at a vocational school in Wunsiedel organised by Ahmad Mansour’s Mind Prevention initiative."
Psychologist Ahmad Mansour is an expert in deradicalisation and prevention of extremism. Himself a migrant, he came to Germany in 2004 as an Arab Israeli. He arranges projects against extremism in schools and prisons and provides support for radicalised young people and convicted offenders. In an interview with D+C/E+Z he describes how government and society can address and prevent extremist tendencies among young immigrants.

How great is the risk of radicalisation among young immigrants?
That depends on how you use the terms “radical” or “violent”. If the question is how many immigrants are willing to resort to violence in the name of an ideology, the answer is only a small minority. But if it comes to violence against women, it is a different story. Many refugees are willing to use violence against women – and have done so dozens of times – because they have different ideas about what a woman is allowed and not allowed to do. They do not accept that a woman can do what she wants with her body. Another example is religious equality. Many young Muslims believe it is unacceptable to criticise their religion.

What is the reason?
Most refugees are young men who come from authoritarian countries where antisemitism and contempt for the west are part of the educational canon. When the influx of refugees soared in 2015, the government struggled to cope, and the manner in which the new arrivals were received was not good. Moreover, new arrivals also struggle to cope with being in a foreign environment. They are unsure what the country and its society expect of them – so they can quickly succumb to fears of losing identity. That is fertile ground for radicalisation - even among second and third generation immigrant children. Islamism has never been an issue confined to refugees.

Why are the children of immigrants more likely to develop radical tendencies than their parents?
I can tell you that from my own experience. As a young man in Israel, I too fell into the clutches of radical Islamists. And I see many in Germany with backgrounds similar to mine. I was a lost soul at the time. I was unhappy with my life, I was bullied, I was anxious about the future, I felt a lack of interest and little love from my parents. We were very poor. In my search for guidance, I met an Imam who showed interest in me. He managed to connect with me, found emotional access to me. And I discovered a new world full of acceptance, new rules and guidelines. I suddenly belonged to an élite. That was toxic for an insecure young man. I was passionate, I didn’t even see myself as radical. I was convinced I was treading the right path. My salvation was that, at the age of 19, I went to live in a different place, came into contact with different people, read different books and had the curiosity needed to overcome those radical tendencies.

So society has failed to reach these young people?
Yes, we have a huge problem with integration. There is a lack of good, proper, sustainable measures for promoting integration. The ones in place at present are not sufficiently professional, too general. Let me give you an example. In Zurich there are state programmes for women: 16 sessions, five of them on the subject of waste separation and not a single one on equal rights and freedom of expression. For integration to work, eye-level encounters need to be arranged. Bonds need to be forged. We have to go where the young people go, speak their language. We also need to provide them with longterm support, create role models and clearly communicate host-society values. We need a way to teach young people democratic discourse and make them realise the importance of talking about taboo subjects. Young people need to learn that an exchange of views is promoted by arguments, not by anger, emotion and rejection. It is best to start not with taboo subjects but with freedom of expression in general, and that needs to be trained. When that basis has been created, when the young people are able to engage with one another in discussion and tolerate conflicting opinions – that is the point at which you can start talking to them about religious freedom and women’s rights. We often fail to reach this target group. The Islamists, Salafists, even Turkey’s President Recep Tayyip Erdogan and nationalists have in many cases had greater success. They have invested massive resources and time in recruiting new followers.

So we need to be better and faster than the Islamist pied pipers?
Yes, that is our motto when we go into prisons: be faster than the extremists, immunise people against their ideas. I once made the provocative statement that Islamists are the better social workers. How did ISIS manage to establish a more professional social-media presence some years ago than the Federal Agency for Civic Education? How could ISIS act at lightning speed producing videos that appeal to young people while it took  democrats days, weeks or months to come up with responses? We have to make it clear that we also have something to offer. These youngsters are interested in freedom but we don’t sell it to them in a way that arouses their interest. We have to get better at that.

Surely schools are an appropriate place for teaching democracy.
Yes, definitely. And some good projects have been launched in different places, but far too little is happening nationwide, and the subject is not part of the school curriculum. Teachers have to find extra time for it. In my opinion, teaching democracy and integration is just as important as teaching maths or English. It needs to be on the curriculum. Another problem is that teachers have no training in intercultural competence and dealing with diversity. That is one of the reasons I get invited to schools. Teachers don’t know how to handle aggressive, anti-democratic behaviour.

How do you reach Islamists who have already turned to violence?
We largely engage in preventive work, trying to reach people before they become radicalised. But we also do deradicalisation work in prisons, with people who joined ISIS or have carried out attacks. It is a long and difficult process. It involves psychological support and monitoring, identifying the reasons why the ideology was so attractive. The best thing is if civil society, special prison services and security agencies work together. But that still fails to happen in many German  states. Moreover, there is no guarantee of success. I cannot say that I have deradicalised all those I have worked with.

What is your assessment of the understanding of democracy among sub-Saharan immigrants?
We have worked with some of them in prisons and welcome classes. They are a very heterogeneous group, unlike those from the Arab world. They have a very different attitude towards freedom and democracy. We have come across people who have had very radical Islamist experiences. But I do not know a single offender convicted of terrorism. Those in prison are mostly there for committing petty crimes. And we need to be careful that they do not become radicalised behind bars. Others, however, are liberty lovers and came to Europe in the specific hope of finding a life of freedom and individuality. 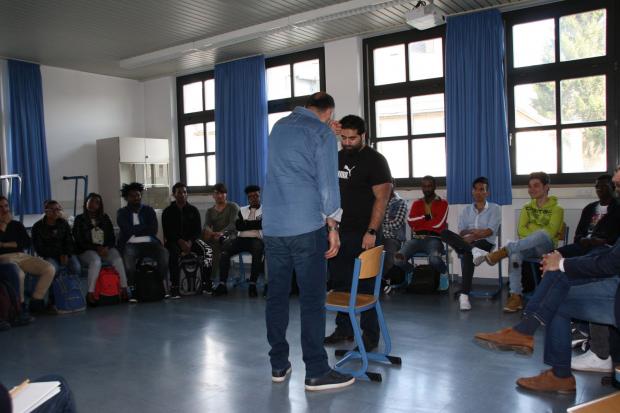