In recent years, the way Libyans celebrated the anniversary of the February 17, 2011 revolution was more an indication of what was wrong with the country than a festive celebration of the end of more than four decades of dictatorship.

In recent years, the way Libyans celebrated the anniversary of the February 17, 2011 revolution was more an indication of what was wrong with the country than a festive celebration of the end of more than four decades of dictatorship.

For over six years, the country has been divided between east and west, with two parts controlled by different authorities: the Libyan National Army, led by the rebel army Khalifa Haftar in the east, and, to the west, the internationally recognized government of the National Union, led by Fayez al-Sarraj.

While celebrations for the 2011 revolution were common in western cities, there were often none in the east. Last year in the eastern city of Benghazi, on the ninth anniversary of the People’s Revolution that ended Muammar Gaddafi’s 42-year dictatorship, there was only one protest in front of a court.

This year, on the occasion of the tenth anniversary, some hope that things will be different. The truce negotiated in October by the United Nations between the main warring factions has been maintained. And in January this year, 75 delegates, selected by the UN to represent a wide range of sectors in Libya, gathered in Switzerland to choose who would establish a new “unity government”.

This new government must replace the currently disunited Eastern and Western authorities and administer the country until new elections can be held in December.

After a decade of chaos, are the two sides ready to celebrate the date together? “I hope so,” said Tarek Megirisi, analyst specializing in Libyan affairs at the European Council on External Relations. “Across the country, people want to remember this was a day of change.”

Megirisi also points out that Libyans in East and West already had something in common during the celebrations of the revolution. “The artificial attempts to celebrate in Tripoli [oeste] and try to remove any kind of celebration in Bengali [leste] took place for the same political reason, ”he explains.

In Tripoli, officials have presented themselves in recent years as “the guardians of the revolution”, which would have liberated the country from Gaddafi and defended the city against attacks by Khalifa Haftar from the east, explains Megirisi. “They do this even when people accuse them of being petty tyrants themselves.”

In Bengasi, the message from the Eastern authorities who have tried to avoid celebrations in recent years is that the 2011 revolution opened the door to Islamic extremism. The eastern faction also stresses that Haftar and his militias are to be celebrated, as they are believed to have protected eastern Libya from this threat.

This is only part of the complex story that Libyans have faced since they held their first elections in 2012, after revolutionaries ousted Gaddafi from power in 2011.

In 2014, after fierce election results sparked a new conflict, international powers became more involved in Libyan affairs, with countries lending their support to the east or west depending on their own political motivations.

Egypt, Saudi Arabia and the United Arab Emirates, for example, supported Haftar in the east, in part because of the rebel army’s opposition to the Muslim Brotherhood in Libya. All these countries are opposed to the versions of this organization on their territory.

Turkey entered the fray by supporting the Western National Union government in Tripoli, for economic and political reasons – and because its regional rivals supported the other side. Qatar had similar motives for supporting the forces in Tripoli.

Libya’s geopolitical potential and oil wealth have also attracted other countries, such as Russia. Libya’s role as a starting point for refugees heading to Europe and its proximity to NATO bases on the Italian peninsula have also led France and Italy to become involved in the conflict.

Doubts about the departure of foreign actors

During the negotiation of the ceasefire last October, the UN asked the nearly 20,000 foreign fighters, supported by Turkey, Egypt, Russia, the United Arab Emirates and Qatar, to leave the country. But that seems highly unlikely, says Arturo Varvelli, head of the European Council on Foreign Relations office in Rome, who has been researching Libyan politics since 2002.

“Libya has become a kind of proxy war,” Varvelli told DW. “I think that’s Libya’s biggest problem right now: trying to contain regional actors, many of whom have different views on Libya.”

Varvelli believes that many foreign powers, such as Turkey and Russia, which have “boots on the ground”, plan to stay: “Unfortunately, I fear that they are unlikely to leave after a simple call of the UN, or because of the new government of national unity. “

The new presidential council created to form this new government has also been criticized. The forum that elected the council “is widely seen as a gathering of opportunistic and greedy politicians with little legitimacy or influence,” wrote Wolfram Lacher, of the German Institute for International and Security Affairs, and Emadeddin Badi, of the Atlantic Council’s program for the Middle East, in a recent analysis.

“It’s hard to be optimistic,” Badi says. “Many associate the desire of the majority of Libyans for positive change – in many ways a by-product of conflict fatigue – with a supposedly positive outlook for the new government.” But in fact, Badi adds, no one seems to have learned anything from the last unity government, formed in 2015 with UN support and which failed to unite the country.

“The fact that we are at exactly the same point – with just a few tens of thousands more lives lost, a few million more lives in ruins and the country in tatters – is hardly a reason to celebrate,” Megirisi says, who worked in Libya between 2012 and 2014.

Sometimes, he says, it seems Libya is just going around in circles. He feels that the Libyans themselves feel helpless and have become quite fatalistic.

“But it is the occasion that gives hope to me and to others,” said Megirisi, referring to the new government of national unity. “As long as opportunities continue to present themselves, at least we have the opportunity to change. I’ve been saying this since 2011 and it seems like we regularly miss these opportunities. [Depois de Kadafi], for the first time in 50 years, Libyans have become free to make their own way,” he said.

“The fact that they forged a path that led directly to war is not the most positive result. But despite this, the fact that freedom exists and that hope persists is the true gift of the revolution." 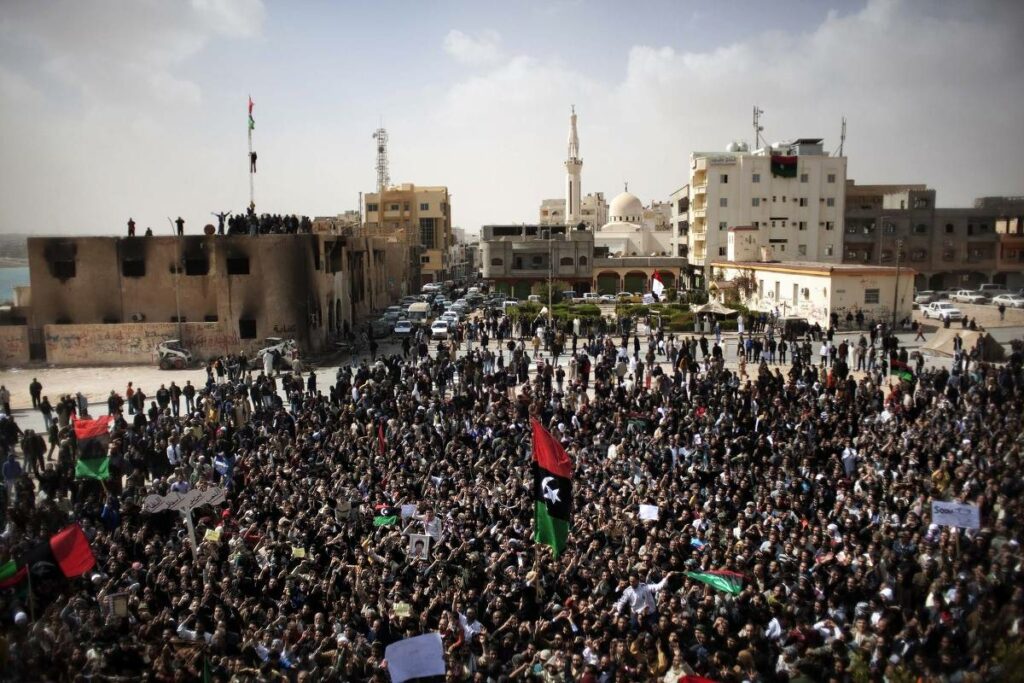