The Arab uprisings ten years after: between Islamist threats and authoritarian setbacks. What future lies ahead for North Africa?

Ten years after the Arab uprisings, the processes put in place to obtain democracy and rights are still far from being completed. In the beginning, the uprisings had succeeded in putting an end to the decades-long authoritarian era in Egypt, Tunisia and Libya, paving the way for democratization in the region. Thanks to their robust opposition to previous regimes and to the support of the West, the newly formed moderate Islamist parties, which claimed to accept the principles of the democratic game, were successful in all three scenarios, but then proved to be largely unqualified to govern; this – given the current challenging context – resulted in their progressive exclusion from the North African political scene.

At the same time, the political vacuum that followed the overthrow of authoritarian rulers and the subsequent attempts to restructure the region left room for the proliferation of national and international violent extremist groups, which exploited the institutional weakness to take root in the North African socio-political milieu, sometimes replacing the state where it was lacking.

The subsequent erosion of the democratization process suggests uncertain future scenarios that could lead to an authoritarian setback or a further expansion of violent extremism in the countries in transition, leading to repercussions on regional security and, more broadly, on the entire Mediterranean basin.

This paper, after examining the causes behind the extreme fragility of the post-2011 North African context, aims at outlining the most likely future developments in the area.

The 2011 uprisings arose from a state of widespread discontent resulting from decades of mass oppression inflicted by the authoritarian powers that difunctionally governed the North African region. In fact, a deep and widespread corruption persisted in the region which, together with the increase in social inequalities and a general worsening of living conditions, fed the population's dissatisfaction to the point of pushing citizens to overthrow these political systems and achieve democratization, an improvement in living conditions and greater respect for rights and liberties.

When the riots began to show proof of success, next to those who fought for democracy, a prominent role was played by Islamist groups that despite they did not share the same revolutionary values, they strove to remove the governments that had up to then persecuted and relegated them to hiding.

Figure 1: States of the Arab uprisings (Source: The Washington Post) [4]

3. Threat to the democratization processes: political Islam and violent extremism

After the riots, the most moderate Islamists attempted to rise to power through a democratic competition in their respective countries, forming their own parties that competed in the elections.

From the beginning, their acceptance of democracy aroused many suspicions in the opposition ranks; in particular, there were doubts about their concrete alignment with democratic principles since they conflicted with the core values of the Islamist doctrine.

However, despite the discrepancies with the causes that drove the uprisings, the repression suffered during the years of dictatorships, the firm opposition to the "western oppressor" that had long supported them and the participation in the uprisings were sufficient grounds to allow Islamists to collect political successes throughout the region.

After the initial favorable momentum in the aftermath of the uprisings, the Islamists had to face an increasingly hostile and polarized environment exacerbated by their inexperience in governing the country, leading them generally to make decisions more oriented to preserve power than to provide concrete political solutions.

This framework dominated by chaos and proven inability to govern has favored the spread of international jihadist movements such as al-Qaeda and ISIS, which have found in the institutional deficiency an opportunity to proliferate and take root in the North African social fabric, sometimes even replacing the State.

The parliamentary elections, held between November 2011 and January 2012, saw the victory of the Freedom and Justice Party (FJP), the political arm of the Egyptian Muslim Brotherhood. From the beginning, the party adopted an uncompromising attitude, aimed at exploiting its position of power to impose its own guidelines.[8] The overt interest in preserving the power acquired rather than furthering the country's progress soon resulted in renewed popular uprisings, which paved the way for the 2013 military coup. This in turn caused the ousting of then-Islamist President Mohamed Morsi and the seizure of power by General Abdel Fattah al-Sisi, former army chief of staff and minister of defence, appointed in 2012 by Morsi himself.

Marking the epilogue of the Egyptian democratic experience, the new regime started a fresh and bloody persecutory wave against Islamism. In this scenario, the army and police violent actions were numerous and led to the killing of hundreds of people. The effect of the hard line adopted by al-Sisi, which was later extended to anyone opposing the regime to strengthen the power, was counterproductive: in fact, given the impossibility of non-violent political participation, there was an increase in attacks on security forces and Christian minorities by Islamist militants.

5. The fragile democratic stability of Tunisia

Since the dawn of Tunisian democracy, the Islamist Ennahda party, led by Rachid Ghannouchi, has managed to take part in all government coalitions from 2011 until the forced suspension of parliamentary activities last July, at the behest of President Kais Saïed. The latter, by appealing to his constitutional powers, responded to popular demands to put an end to corruption and the adoption of cosmetic government measures, replacing the previous executive with a new team of technocrats, led by Najla Bouden Romdhane, the first female PM of the Arab world.

Like in Egypt, in Tunisia too Islamists adopted controversial positions regarding the pursuance of the uprisings' objectives, giving credit to the accusations of those who claimed that they aimed exclusively at conserving their leadership position. This, together with the repercussions of the Egyptian military coup and the internal struggles in Libya, led to a progressive decline in popular consensus towards Ennahda. The reasons behind this decline are various and are not only linked to the party's changeability, but also and above all to the worsening of the socio-economic conditions in the country, an issue that has never been tackled through effective rehabilitation policies.

6. The tough path to reconciliation in Libya

In Libya, even though the free elections of July 2012 had decreed the victory of the secular coalition, once in parliament, the Justice and Construction Party (JCP), the political branch of the Libyan Muslim Brotherhood and the first opposition party, made a series of strategic alliances that allowed it to become the most influential group in Congress.

Also in this case, the openly opportunistic strategy of the new Islamist front and its ties with some armed militias let to a drop in consensus. Many Libyans, indeed, felt that the group's ambitions were hindering democratization. This led in 2014 to square protests throughout the country, in which Libyans demanded the dissolution of Congress and early elections. After an initial denial, elections were held and marked a devastating defeat for the Islamists in June 2014. The Congress - dominated by Islamists - refused to recognize the newly elected parliament, splitting the country into two separate and rival administrations and starting the long and murderous Libyan civil war.

At present, despite the efforts of the UN-led Libyan Political Dialogue Forum, which has allowed the installation of the Government of National Unity (GNU), whose function should be to deliver the country to the forthcoming elections of December 24, the process of political transition remains fragile due to a long series of still pending circumstances.

The jihadist tradition in North Africa has remote roots and the fragility linked to democratic transitions has allowed it to reemerge. To understand the current threats in the region, it is necessary to start from the heart of the problem: Libya. Libya has become a connector of terrorist groups due to the persistence of several problems, among which the presence of foreign mercenaries, social fragmentation, institutional weakness, and the absence of controls especially along the country's porous borders.

In this scenario, also considering the socio-economic precariousness compounded by the conflict and the humanitarian crisis, it is easy to understand how terrorist groups have found fertile ground to recruit new units, train them in special camps and fill their coffers with all sorts of illicit activities.

The problem is likely to spread to neighboring states. In Egypt, the failure of moderate Islamism, along with the hard line adopted by the regime to repress Islamists and political opponents, have caused an increase in terrorist attacks and is fueling the attractiveness of jihadist narrative.

In addition, the 1,200 km of shared border with the former Jamahiriyya contributes to an additional risk of terrorist infiltrations.[30] To stem the threat, Egypt has armed Haftar's anti-Islamist forces, making a rather controversial choice, as it could contribute to fueling Libyan chaos.

Tunisia also shares borders with Libya, as well as hosting a large Libyan community. Moreover, similarly to the Egyptian case, the forced exclusion of Islamist factions from leadership has increased risks of violent involutions, especially considered that Tunisia, the country with the world highest per capita rate of ISIS-affiliated foreign fighters, has to deal with their return to homeland, which seems to be happening mostly through the border with Libya.

Although the complexity of the picture described above does not allow for a clear outline of possible future scenarios for the three countries, the most plausible hypotheses are presented below.

Regarding Egypt, despite the fact that there is not the same instability as in Libya and Tunisia, the risk of clashes and violent internal upheaval cannot be excluded. According to some, the hard line adopted by al-Sisi is counterproductive, as it gives credit to the jihadist narrative stating that the path of violence remains the only viable one, particularly after the ouster of moderate Islamism from the scene and the closure of political participation to the opponents of the regime.

In Tunisia, after the latest events, it is difficult to identify a precise future scenario. Given the political instability and the serious social and economic conditions in which the country lies, Saïed's action has been greeted with both relief and suspicion by the population. The recent appointment of the new government seems somehow to remove the fear of an authoritarian and personalistic drift, but the regaining of political rights by the Tunisian electorate appears still extremely uncertain at the moment.

The analysis of the Libyan scenario is even less encouraging. Political chaos, poverty and the widespread presence of armed groups hinder the success of the long-desired diplomatic solution. The success of the forthcoming elections will be fundamental in rebuilding popular trust and weakening the rhetoric of jihadist militias, still free to act unchallenged in the country.

Ultimately, it will be interesting to examine the management of repatriation of foreign fighters throughout the region: their acquired experience with tactics and narratives could add new threats to an already deeply unstable theater.

In light of what has been observed, the extreme fragility of the democratic transition and the inexperience of parties in power have perhaps determined the failure of processes triggered by what were naively called "Arab Springs" in 2011. 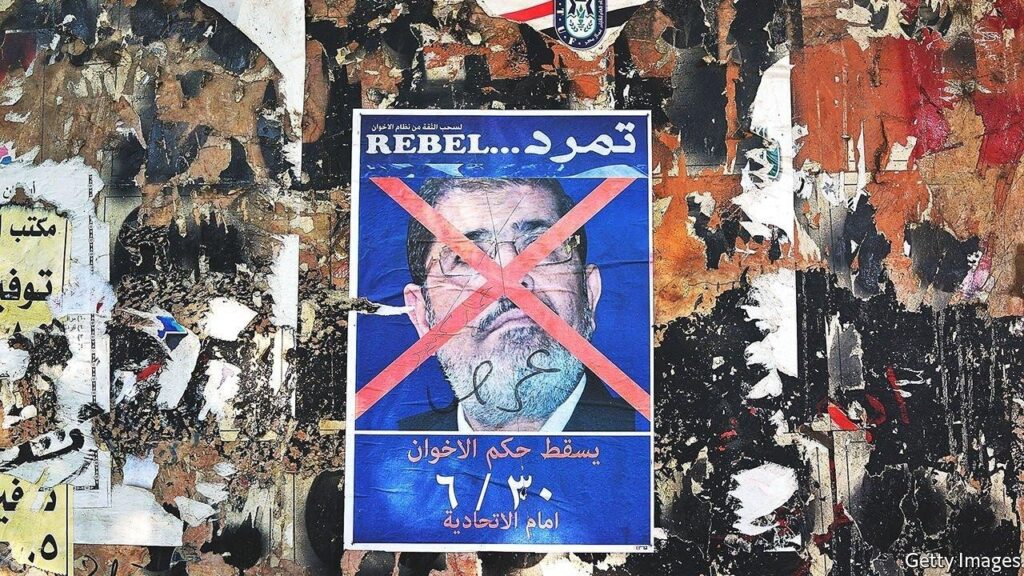