In 2018, Rushan Abbas spoke out about the disappearance of her relatives — in-laws, nieces and nephews who she believes vanished into the People’s Republic of China’s (PRC) network of internment camps and forced labor programs.

Six days later Abbas’ sister, Gulshan Abbas, who worked as a doctor at a government hospital, and her aunt disappeared in the Xinjiang region of China. More than three years later, Gulshan is still detained by the PRC government.

“She is the first thing I think of when I wake up, and the last thing I think about before going to bed,” said Abbas, the subject of the documentary In Search of My Sister, which was screened at the European Foundation for Democracy in Brussels in February 2022. “Now it is my job to use my power to save those like my sister, who are no longer free.”

Abbas’ sister is among the more than 1 million predominantly Muslim Uyghurs, ethnic Kazakhs, ethnic Kyrgyz and members of other ethnic and religious minority groups the PRC has detained since 2017.

Abbas is the founder of the Washington-based Campaign for Uyghurs, dedicated to promoting human rights for ethnic and religious minority groups oppressed by the PRC. The documentary highlights her sister’s case and the plight of detained Uyghurs and their families seeking to free them.

Many other Uyghurs living outside China also work to free their relatives, advocating on websites, such as WhereIsMyFamily.org and FreeMyMom.org, and posting pictures under the hashtag #MeTooUyghur.

“Almost everyone I know was taken into [the] camps,” Kamaltürk Yalqun told the New York Times in 2019, after his father was imprisoned in Xinjiang in 2018. As a 17-year-old student, Yalqun helped carry the Olympic torch before the 2008 Summer Games in Beijing. He now lives in Boston.

Camp survivors say they have been forced to renounce their religion and culture. Some reported atrocities, including torture and forced sterilization. Uyghurs and members of other ethnic and religious minority groups suffer forced labor, mass surveillance, and persecution in Xinjiang and across China.

Abbas says that on Christmas Day 2020, after more than two years of searching for information, she learned her sister had been sentenced to 20 years in prison on terrorism charges following a closed trial. Family members say the charges against the retired doctor who spent her life helping people are “preposterous.”

On her recent European trip in early 2022, Abbas visited Belgium, Croatia, the Czech Republic, Germany, Slovakia and the Netherlands to rally support for Uyghurs whom the PRC arbitrarily detained. She met with government officials, religious leaders and journalists, calling for the European Parliament to pass legislation to stop the PRC from profiting off of its abuses of Uyghurs.

“Europe is a critical ally in the fight against the Uyghur genocide,” she says. We need “allies in the EU to help us form an international coalition to help hold the [Chinese Communist Party (CCP)] accountable.”

“I have rearranged my entire life to advocate for my sister and millions of others who are suffering under the CCP’s genocidal brutality,” Abbas says. “Her disappearance galvanizes my search for justice.” 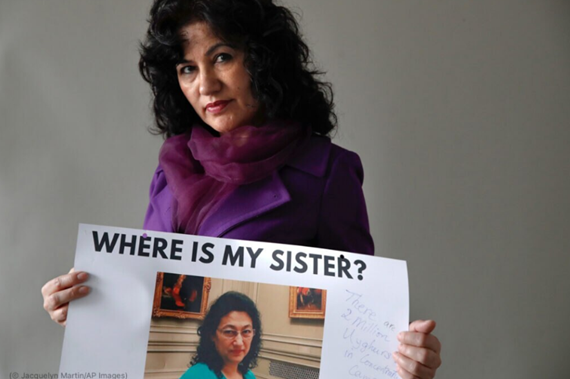