Why Asia matters: Coronavirus and beyond

The Brussels-based European Foundation for Democracy, in collaboration with the US Mission to the EU, recently hosted a webinar discussing the west's relationship with China, which is changing as the latter becomes more confident, and more aggressive.

Webinar: Why Asia matters: Coronavirus and beyond - EU Today

The Brussels-based European Foundation for Democracy, in collaboration with the US Mission to the EU, recently hosted a webinar discussing the west's relationship with China, which is changing as the latter becomes more confident, and more aggressive.

Bonnie Glaser of the Washington D.C. based Center for Strategic & International Studies, opening the debate, stated "in the first six months of 2020 China's policy towards many countries in the region has become even more assertive - Australia's call for an investigation into the origins of the coronavirus pandemic prompted Beijing to impose tariffs of more than 80% on Australian barley imports, stopped the import of Australian beef, and cautioned Chinese students from travelling to Australia to study. In the South China Seas we have witnessed Chinese naval activities that have included the sinking of a Vietnamese fishing boat."

She referred also to escalating tensions between China and India in Kashmir which in recent weeks have seen soldiers killed in hand to hand fighting.

The tense situation in Kashmir, which has its roots in the Indian Independence Act of 1947, has been largely defined by the rivalry between India and Pakistan. However, what has been largely overlooked is the fact that China has been quietly building infrastructure, and taking control of Kashmir's abundant water resources.

Ms. Glaser also referred to the much increased military activity around Taiwan, which China claims as its own, with regular incursions into Taiwan's Air Defence Identification Zone by Chinese aircraft.

China, the speakers agreed, has a tendency to benefit from crisis - conflict is the catalyst that drives progress, as students of Marx will know well - and COVID-19 is seen as an opportunity to for China to advance its interests.

Ambassador Harry H.J. Tseng Taipei Representative Office in EU and Belgium, said "the world sees danger in a crisis, while China sees opportunity. As Chairman Mao stated, 'the more chaotic the situation, the greater the chance.'"

This is not forgotten by the Chinese Communist Party, the ambassador said, and it remains their mindset to this day. China wants to use this situation to challenge the world order.

China has a fear of other countries taking advantage of it at a time it is experiencing changes. Insecurity is always present. China employs misinformation to present other countries handling of the pandemic as inferior to its own.

Roland Freudenstein, Head of Research and Deputy Director of the Wilfried Martens Centre for European Studies, referred to recent Chinese disinformation campaigns and cyber-attacks on western hospitals as being part of a trend: European discourse on China has been increasingly critical since 2017. Such activity was stepped up after the pandemic outbreak. Beijing, the speaker warned, is now apparently able to use its skills to influence the EU to censor documents that the Chinese may find objectionable, such as the EEAS report on disinformation.

A growing number of countries around the world are re-assessing their relationship with China, and serious concerns are now being raised. Many governments are opting not to include Huawei in their 5G infrastructure plans due to security concerns.

Ambassador Tseng noted that the above mentioned military actions, conflict with India, the highly controversial new security law in Hong Kong, are happening at the same time. You cannot help but ask “why?”, he said.

"All this, with the pandemic, and the racial conflict in the US, all these things are what the CCP is happy to see. In a crisis when we think of how to mitigate the losses, the CCP thinks of how to enlarge the damage, & then to utilise the losses in a way to benefit itself, and to increase its strength. The CCP thinks very differently from the free world."

"The current Liberal Democracy that our world order is based on since the end of the second world war is dominated by US power. China doesn’t like that China wants a Chinese model, in a new world" 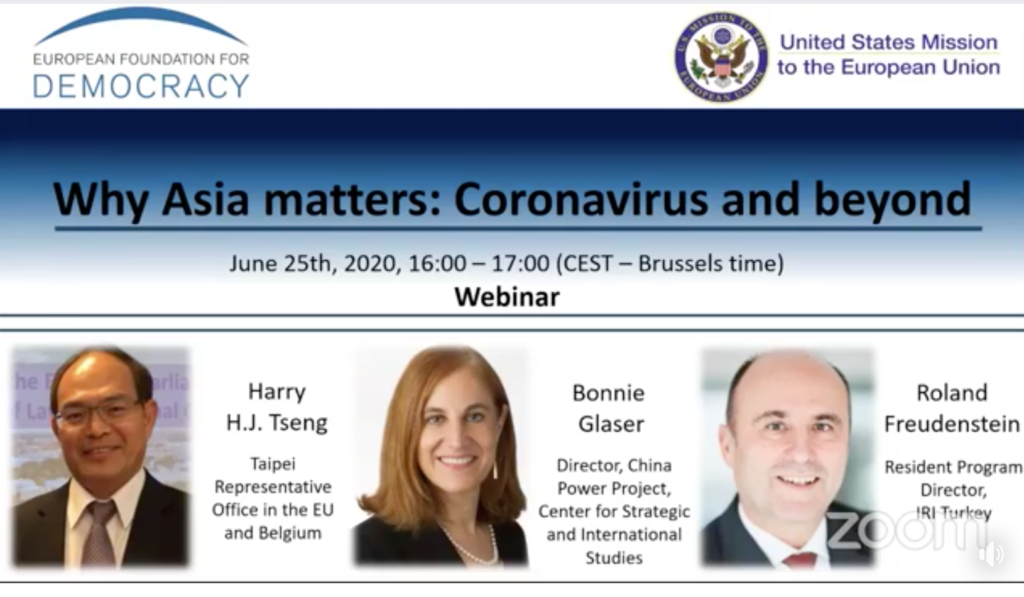