Why Russia Is Destined For Defeat In Ukraine

Why Russia won’t win in Ukraine – As Russian President Vladimir Putin continues his war on Ukraine, commentators observe that in the end, he cannot win. He solidified the Ukrainian resolve to resist his aggression. He can never destroy the Ukrainian identity, and if his aim is to occupy the entire country he will face protracted resistance.

All this is true. Yet paradoxically, there is also something defeatist in this observation. The focus on the long-term distracts from our leaders’ failure to help the Ukrainians now. It highlights a sense of collective helplessness at the carnage unfolding before our eyes in what is perhaps our most defining crisis since the end of the Cold War. The US Congress put forth a resolution to kick Russia off the U.N. Security Council—in full knowledge that however desirable, this simply will not happen—shows that policymakers simply do not know what else to do. It also underscores the failure of the U.N. as an institution designed precisely to prevent the naked aggression Putin is displaying today.

Nothing highlights the disconnect between the long-term and present as President Biden’s own words at a recent press conference where he unveiled additional sanctions against the Kremlin.  “Some of the most powerful impacts of our actions will come over time…no one expected the sanctions to prevent anything from happening,” he said. Meanwhile, Ukrainian President Volodymyr Zelensky told EU leaders soon after the announced sanctions, “This might be the last time you see me alive.”

To be sure, the West did more than simply impose sanctions. During Russia’s build-up in recent weeks, the US and its allies stepped up deliveries of lethal and nonlethal military aid to Ukraine and are sending more military aid now. For the first time in NATO’s history, the Alliance activated its Response Force (NRF), a multinational force comprised of around 40,000 personnel the alliance can deploy on short notice should that become necessary to protect NATO allies.

The problem is, Biden made it clear that the US will not send troops to Ukraine, as it is not a NATO ally. More to the point, not all aid is created equal. In the absence of such steps as sufficient offensive weaponry, the opportunity for the Ukrainian military to reinforce as Russian forces surround them, along with an imposition of a no-fly zone, it is hard to see how the Ukrainian military can keep holding indefinitely against Russia’s bigger military, even as it has put up, as expected, fierce resistance and imposed serious casualties on Russia.

We still do not know whether or not Putin’s aim is to occupy the entire country or merely to render Ukraine a destabilized state, occupy key strategic areas, and hold them as buffer zones. But we can surmise that no matter what, the West is likely facing a new world where the US has to rethink European security. This is not an easy challenge and it will hold global implications.

Ukraine meanwhile is a true partner to the West, one that shares its most deeply cherished values of freedom and liberty. Former Afghan President Ashraf Ghani fled his country as soon as the Taliban entered Kabul last August. But Ukraine’s President Zelensky chose to stay in Kyiv in the full knowledge that Putin likely has plans to kill him. He, along with his country, embodies the very core of the liberal world order that Putin aims to destroy.  “America stands up to bullies. We stand up for freedom. This is who we are,” Biden said in the same press conference where he announced additional sanctions. But is America truly standing up for freedom? Or have its elites gotten so comfortable over the last thirty years in the bubble of peace and prosperity that they forgot how fragile freedom truly is, and what it takes to protect it?

If the United States allows Putin to win in Ukraine now, no matter what happens after, it will signal to the world that America has corrupted its purpose, that it lacks courage and moral fortitude to protect, by its own description, a strategic partner. This failure will cause enormous damage to US credibility and signal that defying the U.S. is worth the risk because values and interests often go hand in hand. Ukraine for its part will never submit to the Kremlin’s tyranny. But Ukrainians will remember that the West could have done a lot more and chose not to, while Western leaders would have to contend with the fact that their own citizens now live in a far more dangerous world. 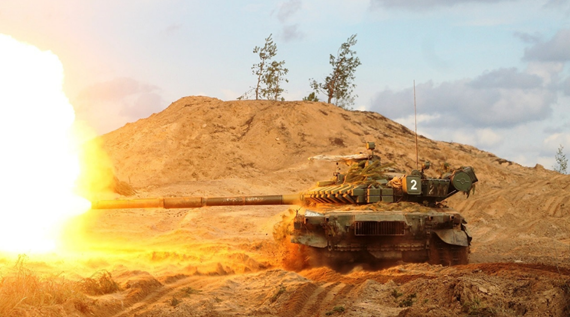