Why the West Should Hold Off on Normalising Relations With Iran

Trade with hostile nations is always not a bad idea—after all, interdependence can increase the chances of peace. Yet some European countries were perhaps naïve to pursue a normalisation of relations with Iran so eagerly.

Just when relations between the West and Russia are worse than ever, some say we are close to a new nuclear deal with Iran. That should bring about a revival of the so-called Joint Comprehensive Plan of Action (JCPOA), signed in 2015. This was an agreement made between the permanent members of the UN Security Council plus Germany (P5+1) and the European Union with Iran to ease sanctions imposed on Iran in exchange for some kind of monitoring of Iran’s nuclear programme. The US, under then-President Obama, was part of this.

In 2018, Obama’s successor, Donald Trump, effectively ended that agreement—much to the frustration of European governments, which were already eager to start trading with Iran again. With a special investment vehicle, they tried to revive trade with Iran independently of the US, but failed grandly in yet another demonstration of US political and economic predominance.

In itself, trade with hostile nations is certainly not a bad idea, as long as it is done under certain conditions—after all, interdependence increases the chances of peace, although the Russian invasion of Ukraine does demonstrate its limitations. Yet European countries were perhaps naïve to pursue so eagerly a normalisation of relations with the Iranian regime, as Iran-experts Rebecca Schönenbach and Kambiz Ghafouri argued at a seminar on the subject organised by the European Foundation for Democracy think tank that took place recently in Brussels.

Iran is not just a danger to Israel

According to both Schönenbach and Ghafouri, Europeans need to understand that Iran is not only a danger to Israel, but also to Europe. After all, the Iranian constitution stipulates that the regime must export the Islamic revolution. They point out that Iran is implementing this objective, and not only in the Middle East, where the governments of Lebanon, Iraq, and certainly Syria are under strong Iranian influence: in the West too, Iran, like Russia, has long engaged in political influence and the pursuit of dissidents.

Moreover, Iran goes so far as to even carry out terrorist attacks. In recent years, for instance, there have been Iranian terror activities in Belgium, the Netherlands, Denmark, France, Germany, and Albania, as well as in the United States. These have often involved Iranian dissidents or Jewish targets, although locals may also be victims: in 2012, an attack on a bus of Israeli tourists in Bulgaria also killed the Bulgarian driver. Such is the logic of this kind of ruthless terrorism.

Most famous is the failed attack, in 2018, on a congress of Iranian dissidents in Paris, in which the perpetrators lived in Wilrijk—a district of Antwerp, Belgium—under an alias and had Belgian nationality. Thanks to international cooperation, the ringleaders of this were rounded up, including by Belgian law enforcement. The main organiser of this foiled attack, Assadollah Assadi, was an Iranian diplomat. The terrorist diplomat is now locked up in a Belgian prison.

Alleged attempts by the Belgian government to swap the man with a Belgian citizen held hostage by the Iranian regime in Iran recently led to great indignation, with the Brussels Court of Appeal even imposing a provisional ban on this at the request of Ingrid Betancourt, a Colombian-French politician who was herself held hostage for a long time by a left-wing terrorist group and understands better than most how such deals would only encourage Iranian hostage-taking.

Rumours suggest that Belgian State Security recommended this approach to the Belgian government, which managed to get a framework agreement for this through the Belgian Parliament anyway. We don’t know what all this is really about, but if a hostage-swap is the case, it seems a particularly nonsensical strategy: after all, it encourages Iran to take foreigners hostage in exchange for concessions of all kinds, a sordid practice the regime has used many times before.

At European Foundation for Democracy seminar, Finnish-Iranian journalist Kambiz Ghafouri was not keen on the idea of releasing Assadi, not least because this attack would have been “the biggest terror attack ever on European soil. The policy of appeasing terrorists will hurt Europe, as it did in the past.” In doing so, he referred to another Iranian terrorist, Abdolrahman Banihashemi, who killed a pilot in Switzerland in 1987 and was eventually arrested in Sweden. In 1990, Swedish authorities allowed him to return to Iran: in 1992, he then returned to Europe and murdered three Iranian dissidents at a restaurant in Berlin.

Frustratingly, Sweden made a similar mistake again this year. In March, Swedish authorities sent two Iranians suspected of terror back to their country. On 21 August, a bomb possibly intended for Iranian dissidents was discovered in Stockholm. It shows how naïve and unassertive European countries continue to be in dealing with countries like Iran, once dubbed a “rogue state” by the US.

It is worth noting that Ghafouri also described how easy it is for people close to the Iranian regime to visit the West, have their children study and enjoy medical care there, even though they have assassinations and repression of the population on their record. In doing so, he called for targeted ‘Magnitsky sanctions’ to restrict their freedom of movement.

Rebecca Schönenbach, a German expert on terrorist financing, discussed in a recent Brussels Report podcast how Iran and Russia “have been cooperating in the Middle East for years,” but certainly a lot more intensely “over the last few months,” as Russia hopes that a renewed Iran deal will provide more opportunities to “evade sanctions”, since “Russia sees Iran as a good vehicle to evade sanctions, with Russia also helping Iran evade sanctions in the past.” She refers to how Reza Zarrab, a gold smuggler who helped Iran do this in one of the biggest ever money laundering scandals, was trained by Russia to do so.

According to Schönenbach, Iran is currently delivering drones and machine parts to Russia, often sourcing them from China. Russia is also reportedly planning to export oil to Iran so that Iran can then transit it to the West.  It is also interesting what she says about The Green political party in Germany, which is part of the federal government coalition:

While the German government shuts down German nuclear power plants, [the German] foreign ministry, which is led by the Greens, is willing to allow ‘civilian use’ of nuclear energy to become possible for the Iranian regime. Interesting!

On Iran’s nuclear programme, she warns: “According to experts, they are two to four weeks away from a nuclear warhead, which is not yet a nuclear weapon.” All this makes it clear how nonsensical it is to be wary of Russia while normalising relations with Iran. 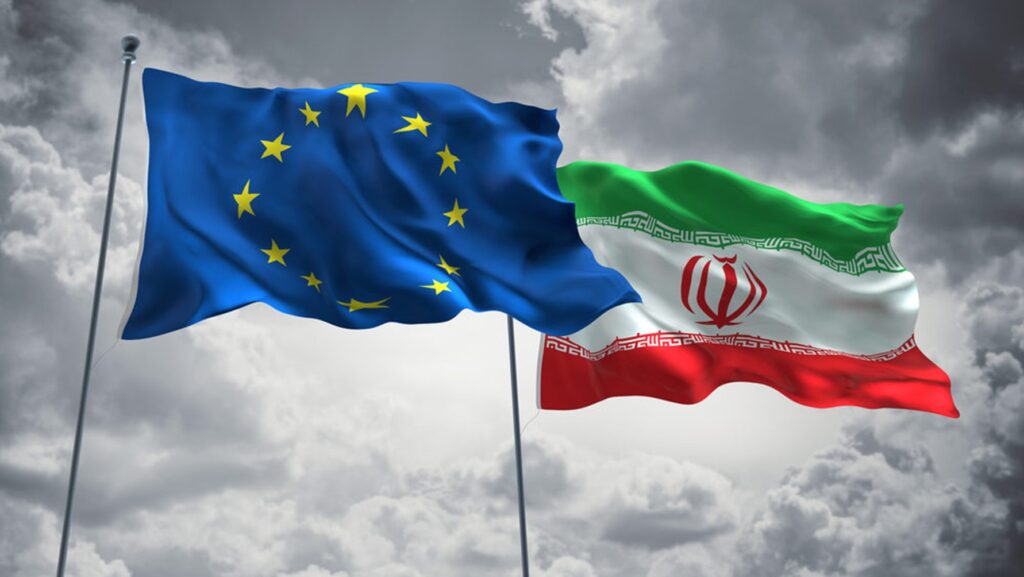