In 2013, EFD published cutting edge research on Islamic policing in Europe entitled "Hisba in Europe. Assessing a murky phenomenon." Authored by EFD's Senior Policy Advisor, Lorenzo Vidino, the research study indicates that hisba is a relatively rare occurrence in Europe, however its mere presence makes it an issue of concern to policymakers.

The posters were the work of Muslims Against Crusades and Islam4UK, two offshoots of the banned extremist group al Muhajiroun. Interviewed by the media, Islam4UK leader Anjem Choudary stated that the East London area of Waltham Forest was about to become Britain’s first sharia-controlled zone. “We have hundreds, if not thousands, of people who are willing to go out and make sure our laws are obeyed,” stated the London-born former lawyer. He explained that the group was “run[ning] the area as a Sharia-controlled zone to put the seeds down for an Islamic Emirate in the long term.”

The events in East London follow a long pattern of publicity stunts from al Muhajiroun legacy groups. Despite their leaders’ claims, there are no indications that members of these groups actually coerced citizens to abide by their rules. City council and police officials, together with local citizens and members of local Muslim communities, took down the posters and the issue was quickly forgotten.

The events in East London, however, should not be dismissed. Over the last few years, authorities in various European countries have witnessed occasional instances in which small clusters of radicals sought to police local Muslim communities and impose strict interpretations of Islamic morality. Unlike in the case of Choudary’s pretend “sharia-controlled zones,” some individuals and groups have used a combination of social pressure and violence to enforce their views.

The phenomenon is rooted in a fringe interpretation of the concept of hisba, a divinely-sanctioned duty for Muslims to intervene when another Muslim is violating God’s law. Most Islamic jurists agree that only the ruler has the right to coercively “command right and forbid wrong.” Yet some, particularly within the Salafist movement, argue that performance of hisba is a duty incumbent on all Muslims.

Research from this study indicates that coercive hisba is a rare occurrence in Europe. Nonetheless, when and where it happens, it has important security and social implications. Coercive hisba is an infringement on the rights of citizens and a challenge to the rule of law. Moreover, it can severely damage the cohesion of Europe’s multicultural societies, as it contributes to the perception held by many Europeans that Muslims (most of whom are the victims of this behaviour) are unwilling to integrate.

Despite these risks, most European policymakers have acquired very little knowledge about hisba and have not devised policies or practices to confront this challenge. This report is designed to inform policymakers about hisba in Europe. It is divided into three chapters.

Measuring the frequency and severity of hisba-related incidents is a monumentally difficult task. Many European Muslims are reluctant to divulge “internal matters” to outsiders, largely for fear of reprisals. And, unlike al Muhajiroun activists, those who actually perform hisba rarely seek publicity. Journalistic investigations in several countries claim to have uncovered instances of hisba, but often the evidence is limited to hearsay. Scholars have not undertaken systematic or empirical studies on the subject.

Interviewees for this study repeatedly expressed the view that in many Muslim communities hisba is a poorly kept secret: most people are aware that it happens on some scale, but few report it. One official compared the phenomenon to organised crime in areas of southern Italy.

Despite these difficulties, the author maintains that hisba is a relatively rare occurrence in Europe. It indeed exists, but not on a large scale. It is also important to note that trying to gauge the phenomenon on a continent-wide basis is an almost futile effort, as there are enormous differences from country to country and even from town to town.

The author identified three forms of hisba in Europe: Hisba through advice: by far the most common, it occurs when pious Muslims urge co-religionists to adopt appropriate Islamic behaviour. It is for the most part unproblematic, as it does not infringe on individual rights.

Hisba by pressure: occurs when small groups use psychological and social pressure to impose certain behaviours. Tactics range from spreading rumours to boycotts. As one Muslim kebab shop owner in Catalonia recounted, “I was never threatened, not even in a veiled way, but when those four bearded men with stern faces told me it was un-Islamic to sell beer, I knew I had to stop.”

Hisba by coercive force: occurs when individuals or small groups resort to intimidation or actual violence to correct “un-Islamic” behaviour. While circumstances differ significantly from place to place, there are sporadic and anecdotal indications that in various European cities individuals or small groups of Islamists have engaged in what can be termed religious policing, albeit on a small scale. 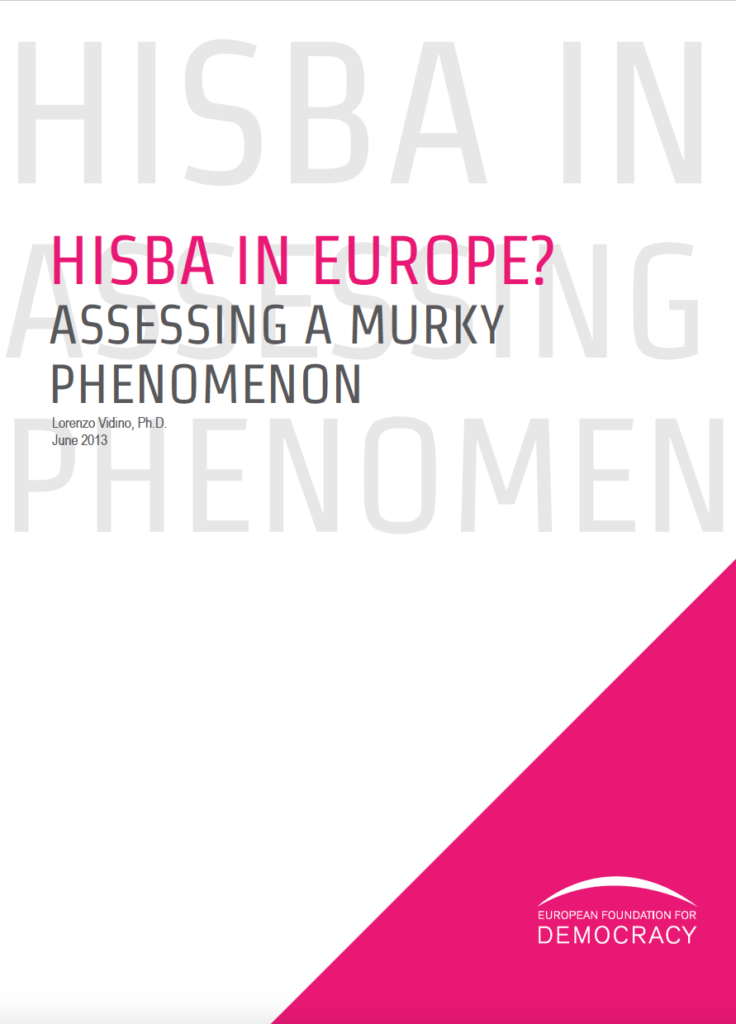