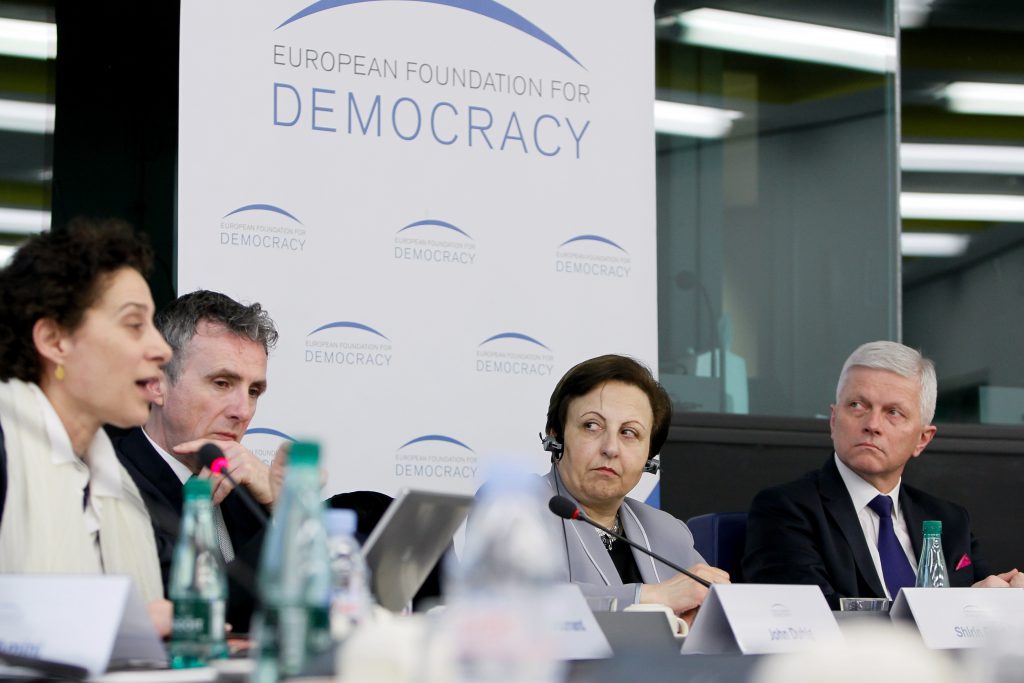 From March 11-13, 2014, EFD hosted  Nobel Prize Winner Shirin Ebadi, together with Iranian human rights activists Ladan Boroumand and Roya Bouroumand, for briefings with members of the European Parliament in Strasbourg and Brussels. Shirin Ebadi was awarded the Nobel Peace Prize in 2003 for her work to promote democracy and respect for the rights of Iranians, especially women and children. Ladan Boroumand and Roya Boroumand  were the joint recipients of the Lech Walesa Prize in 2009 for their foundation's work to promote information about the human rights situation in Iran, which you can read about here.

The briefing in Strasbourg was hosted by Andrzej GRZYB MEP (EPP, Poland), Vice-Chair of the Subcommittee on Human Rights, and was primarily intended for legislators who are responsible for preparing a Recommendation on the EU strategy with Iran.

Ebadi and the Boroumands told policymakers that the election of President Rouhani had not improved the human rights situation in Iran. On the contrary: if the public executions under Rouhani continue at their current rate, they will surpass the number under his predecessor. They emphasised the depth of the ideological divide between the Islamic Republic’s world view and the most basic principles of universal human rights.

Ebadi said she accepted that there was huge pressure on EU governments to engage commercially with Iran but urged caution, and asking diplomats if they could entrust their countries’ business interests to a regime so cavalier about observing the rule of law and respect for human rights. She showed a photo from the Radio Farda website of a billboard that had been put up in a number locations in Tehran that very same morning, which had a photomontage of the faces of Saddam Hussein and Catherine Ashton, the EU foreign policy chief, with the strap line: ‘The face of Western human rights’

Ebadi and the Boroumands brought these same messages to EU diplomats in Brussels, responsible for formulating national European government policy recommendations on Iran.  As reported in this story by the EUobserver, Ebadi stated that if she ever returned to Iran, she expected that “… the intelligence services would come to arrest me with handcuffs” and even hang her. Ebadi also emphasised Iran’s complicity in providing military assistance to the Assad regime, explaining that in doing so, the Iranian rulers are sending a message to their own citizens that they are willing to use violence against any serious domestic opposition, even if it turned Iran into a second Syria.

As Baroness Ashton considers Iran’s proposal to relaunch an EU-Iran "human rights dialogue" Ebadi and the Boroumands stated that this could be an opportunity for the EU to make a difference and urged the EU to ask the Iranian regime for a few preconditions in advance to prove their intentions: an end to executions in public; an end to death sentences for minors; and permitting people from the Baha’i religious minority study in university. The EU should also insist that Iran grant a visa to the UN Special Rapporteur on Human Rights, Ahmad Shaheed, to permit him to visit Iran and see the situation of the respect of human rights for himself. .