There is growing evidence of forced labour, torture, forced sterilisation and arbitrary detention against ethnic Uighurs in China’s Xinjiang region. While the international community and the EU have barely raised their voice, some international companies profit from the forced labour in detention camps while China is working on silencing reports of this on-going cultural genocide, even in European countries.

There is growing evidence of forced labour, torture, forced sterilisation and arbitrary detention against ethnic Uighurs in China’s Xinjiang region. While the international community and the EU have barely raised their voice, some international companies profit from the forced labour in detention camps while China is working on silencing reports of this on-going cultural genocide, even in European countries.

Uighurs are a Turkic Muslim population located in Xinjiang, also known as East Turkestan, a North-Western region of China. Bordering Mongolia, Russia, Kazakhstan, Kyrgyzstan, Tajikistan, Afghanistan, Pakistan and India, it enjoyed intermittent autonomy and independence until it came under Chinese rule in the 18th century. After a short-lived independence in 1949, the Xinjiang was given autonomous status under Chinese control. According to official figures issued by the Chinese authorities, 12 million Uighurs account for half of the population of the region, which is rich in resources, such as oil, natural gas or copper. Under the excuse of fighting terrorism and separatism, the Chinese government target Uighurs in what seems to be an attempt to eradicate an entire culture.

Since 2017, many reports (some of the latest are here, here and here) have emerged of Uighur people being arbitrarily detained in camps, enduring indoctrination, torture, forced sterilisation, child abduction, forced labour, or organ harvesting. Chinese cables leaked by exiled Uighurs and published in 2019 detail mass surveillance programs based on artificial intelligence to single out people for questioning as well as operation manuals for running thousands of “re-education camps”. Disturbing footage of hundred blindfolded people awaiting on their knees to be led to trains, satellite analysis of dozens of suspected camps across Xinjiang broadcasted in the media have awaken the worst memories of the 20th century.

In June 2020, the US Commission on International Religious Freedom concluded that the repressive population control measures in China against Uighur, Kazakh and other Muslims were clearly designed to genetically reduce this population and might meet legal criteria for genocide under international law. Rushan Abbas, Founder of Campaign for Uighurs spoke of an ethnic cleansing, condemning “the largest human trafficking operation in the world” during a conference organised by the Brussels-based European Foundation for Democracy in mid-October. She deplored the lack of concrete measures at the EU level to address the human rights emergency that has worsened since the beginning of the pandemic.

According the official Chinese narrative, there are no camps but “vocational training camps” or “schools” where “students” voluntarily enrol to acquire marketable skills and learn Mandarin. In Xinjiang, checkpoints, security cameras and state security agents trace the steps of journalists, activists or scholars, hampering independent reporting and research. Researchers and their close contacts are systematically intimidated to make sure that the official state narrative remains the only story one can hear.

In an article recently published in French-speaking Belgian newspaper Le Soir, Dr. Vanessa Frangville, Director of the Research Centre for East Asian Studies at Université Libre de Bruxelles, warned against the Chinese government‘s insidious strategy to silence reports on the Uighurs persecution by  intimidation of journalists and limiting of academic freedom not only in China but also in Europe.  In particular, she described how the Chinese Embassy regularly interferes in research activities related to the Uighurs, Tibet or Hong Kong in Belgian universities by way of letters, invitations, or visits to the university leadership reminding how detrimental these activities would be for the future of the university.

This induces self-censorship among scholars by fear of consequences for themselves or their colleagues in China.  Other tactics, such as mobilisation of Chinese students abroad or threats to suspend future partnerships with Chinese counterparts are also used by the Chinese regime.  According to Dr. Frangville, Le Soir received a letter from the Chinese Embassy after publication of her article.

Such manoeuvres pose a serious threat to European democracy and fundamental rights, such as access to education, access to information and media freedom, which cannot be tolerated in the EU. Journalists and scholars need to know that they are backed up by their institutions, universities, media and government to conduct independent and objective research in order not to worry about foreign interference.

In December 2019, the European Parliament adopted a resolution condemning, among other things, the involvement of international companies in mass surveillance programmes and forced labour in Xinjiang. MEPs called for the release of all detained persons, including last year’s laureate of the Sakharov Prize, Ilham Tohti, an Uighur scholar fighting for minority rights, while asking the Council to adopt targeted sanctions and freeze assets against Chinese officials responsible for severe repression of basic rights in Xinjiang. The unanimity rule has unfortunately prevented any concrete measure in that direction at Council level.

EU Member States are in possession of ample evidence and information about the situation and have no excuse to remain silent.  If they do, they would become complicit in what we should dare to call a genocide. They can no longer let China erode freedom of speech in the EU and third countries. The large-scale violation of human rights in Xinjiang should be a wake-up call for the Union to finally tackle the double standards that dominate and weaken the European foreign policy. 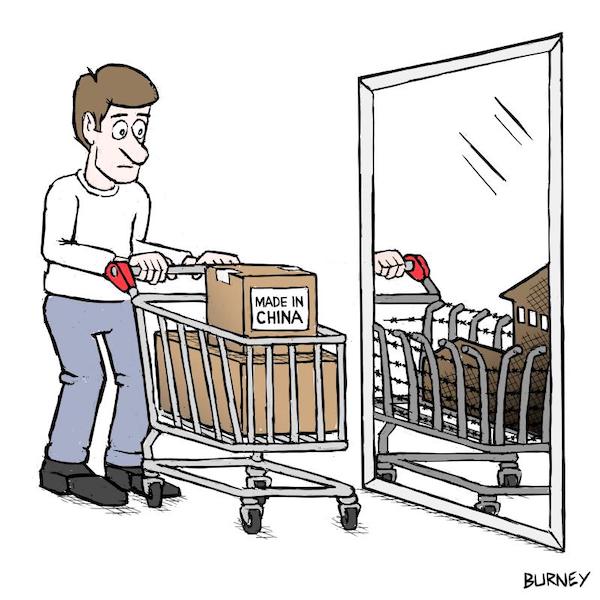